Abstract
Irritable bowel syndrome is a disorder of large intestine or colon that manifest with various signs symptoms like abdominal pain, bloating gas, constipation or diarrhea, sudden urging for bowel clearance which has the deep-seated etiological factors lies at both central nervous system (CNS) and enteric nervous system (ENS). Homeopathy has a good scope in treating such health ailments by acting at its etiopathological aspects in giving a long term relief.

Introduction
Irritable bowel syndrome (IBS) is manifested with various signs and symptoms like abdominal pain, bloating of gas, sudden urging for bowel clearance, frequent urging for bowel clearance, in some cases constipation problems, sometimes loose motion and constipation alternates each other. It is occurred as a result of irregular rhythmical peristaltic movements. The etiopathological causes lies both at central nervous system and enteric nervous system. The person suffering from IBS experience either sudden urging for stool or constipation problem or loose motion alternate with constipation. In some cases it is found of developing IBS after an intestinal infection. It is called post infectious IBS. There are many triggers factor of IBS which affect the nerves that control sensation or muscle contraction of the intestine. In the generalize treatment aspect there is not any permanent long term treatment except relieves of symptoms so that the person can live as normally as possible. In homeopathy it has a good scope to give a long term relief with alleviation of associated symptoms. Well selected constitutional homeopathic remedies can maintain the equilibrium between CNS and enteric nervous system and thus can be helpful to maintain a normal rhythmical peristalsis movement in GI tract.

Literature review of homeopathy in irritable bowel syndrome
Irritable bowel syndrome (IBS), the word itself signifies irritable bowel. So the groups of symptoms arises due to irritable bowel is called irritable bowel syndrome. Here the question arises why the bowel becomes irritable and why? The walls of the bowel i.e the intestinal tract are lined by layers of muscles that contracts and expands in a coordinated rhythmical manner to move the foods from the stomach to the rectum. If you have Irritable bowel syndrome it contracts more stronger and lasts longer than normal so the person will have a sudden urging for stool. Due to stronger and longer contraction the foods is forced through the intestinal tract quickly that causes gas formation, bloating and loose motion. Sometimes the exact opposite condition occurs like longer period of relaxation no contraction in intestines so the digested food stuffs are not moved forward that result constipation problem. So the person suffering from IBS experience either sudden urging for stool or constipation problem or loose motion alternate with constipation. In some cases it is found of developing IBS after an intestinal infection. It is called post infectious IBS. There are many triggers factor of IBS which affect the nerves that control sensation or muscle contraction of the intestine.

Stress – Stress, anxiety, problems at work, problems at home, and financial problems can have a direct effect on IBS. The sign and symptoms of IBS can be aggravated by constant staying in a stressful situation.

Drugs – Some drugs may trigger the symptoms of IBS. Prolonged use of antibiotic, anti depressant drugs, cough syrups containing sorbitols.

In the present society of high stress level, pressure packed life style, suppression of desires, emotions, angers all creates an imbalance in the psychological healthy environment. It reflects in the equilibrium between Central nervous system (CNS) and enteric nervous system (ENS). The enteric nervous system control the peristalsis of GI tract and is controlled by the mesenteric nerve plexus, neurotransmitters (serotonin, dopamine, norepinephrine)   and many more neuropeptides .  Psychological aspects are important determinants of the emotional response to visceral stimulation.  Thus they are responsible for abnormal rhythm of peristaltic movement of GI tract, the altered motility that reflects in either prolonged colonic contraction or sluggish colonic contraction. Sometimes both alternate each other also.

Any pre existing gastro intestinal infection may causes hypersensitivity of the colon results from the injuries to the colonic mucous.  Any injury to colonic mucous releases many chemical mediators like k+, ATP, bradykinin,  prostaglandin. Those substances can directly stimulate afferent neuron terminals and also induce the release of algogenic substances like histamine, serotonin (5HT), nerve growth factor (NGF) and prostaglandins. These cascades of reaction stimulate the colonic pain. 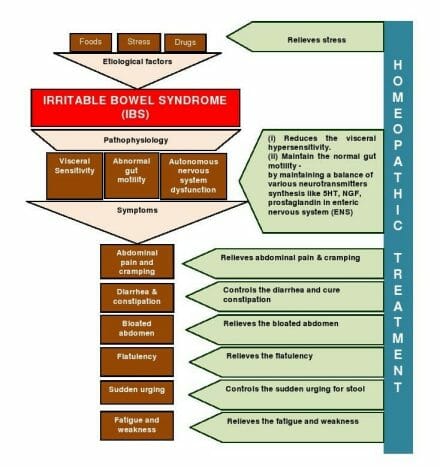