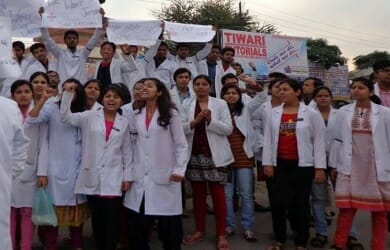 BENGALURU: The Karnataka Ayush Doctors’ Association has announced that 589 Ayurveda, Yoga, Unani, Siddha and Homeopathy (AYUSH) doctors serving on contract basis with over 200 Primary Health Centres (PHCs) will go on an indefinite strike from July 20.

The doctors, recruited under the National Rural Health Mission (NRHM), demand that their wages be increased and service regularised.

Recently, the government had announced a steep hike in the salaries of allopathy doctors.

Dr Shivalingappa, president, NRHM Karnataka Ayush Doctors’ Association, said that the salary of an allopathy doctor at the entry level was close to Rs 60,000 per month following the hike, but AYUSH doctors’ salaries still remain at Rs 15,400.

He added that the Health Minister did not address their concern and gave them false assurances, which was why the doctors had decided to protest.