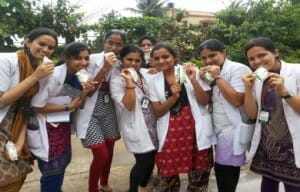 1. It is declared that, it is unjustified to declare a student pass/fail on the basis of a single shot three hour public examination.

2. There should be a more comprehensive way of assessing performance of the students by employing multiple techniques of assessment.

3. It is suggested that there should be Comprehensive and Continuous Assessment for all subjects periodically.

4.  The question paper should be modeled to test creativity and application of intellectual level of the student.

A number of suicides committed by students have been from time to time more especially after the examination or the after the publication of the results as frequently observed in National dailies. As per the recent observations, it is found that 70% students appearing for Examinations are under stress and anxiety.

The issue of curriculum load was also discussed in detail.  A need is felt to reduce both physical and mental load of the students.  For this following suggestions came up during discussion.  (i)  NCERT should develop a model curriculum for the 21st century learners by weeding out irrelevant course content.  (ii)  Everybody need not learn everything.   Therefore, there should be different levels in each subject and a student should have the freedom to choose a combination of subjects of his/her interest both from higher and lower levels for qualifying a board examination.  (iii)  A system can also be worked out in which some subjects are compulsory for assessment and the remaining subjects are necessary for studying but are not for assessment.  (iv)  It was also proposed to create a three year window within which all subjects have to be cleared.  Not only this is a progression toward ‘on demand exam’ when the student is ready but would also serve the ends of social justice and reduce exam load.  (vi)  Both at secondary and senior secondary level, the syllabus for Board examination should be of classes X and XII respectively.

It was also suggested to introduce the open book examination system which has been experimented at some places in our country.

Ideally, there should be no entrance examination for professional courses.  But due to large number of students appearing for entrance examinations and also due to variations across the State Education Boards in terms of standards, course content etc., it has become almost a  necessity to conduct entrance examination which have an appropriate difficulty level to reject a lot of students and to select a few deserving one. There are very few institutions of excellence like IITs, NITs, and Medical College. Everybody wants to get into these institutions. This mad race has two fold implications. The students have to take tuitions, coaching etc and parents have to part with a handsome money.  To overcome this menace, two suggestions were put forward. The first is giving some weightage to the performance of a candidate in the board examination and the second is to make entrance examination based on general abilities like SAT rather than on coaching ability.

The phenomena of stress starts from the very early stage when a child of 2½ year is sent to school and the school starts teaching the ‘3R’s’ of education.  Therefore, it was suggested that no student should be admitted in any school before the age of five and all admissions should be done through a lottery preference given to  students residing in the localities nearby the school.

It was also argued that a reasonable stress is desirable for motivation to achieve better in examination.  Parents, schools and teachers also causes much stress among students.  Counselling is the remedy to lessen this and save the students from all type of abnormalities.  Each school should have a Counsellor to interact with the students, teachers and parents.  Since, immediately Counsellors cannot be available in all institutes, to begin with one teacher from each school should  be provided a short term training to deal with stress-related problems.  There can be a district centre to which more serious cases can be referred to.  Help lines are also proving to be quite useful during  examination days.  Each board should have a help line during examinations to overcome stress.  Schools can also follow the suit.