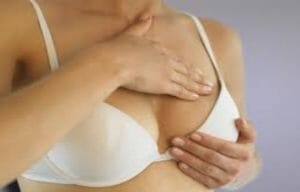 At least five research studies have shown that there IS a strong connection between breast cancer and bra wearing for many hours per day. Some scientists are calling for a boycott of Komen and the ACS, because they say this cover-up is costing lives.

The problem with bras, according to medical anthropologists Sydney Ross Singer and Soma Grismaijer, is that they restrict the flow of lymphatic fluid, thereby retaining toxins in the breast that have nowhere to go. They compare it to the feet and ankle swelling that occurs on long flights, because the lymphatic fluid pools in the lower extremities and isn’t allowed to circulate.

Singer and Grismaijer, co-authors of Dressed To Kill: The Link Between Breast Cancer and Bras, say that wearing a bra more than 12 hours a day dramatically increases the risk of getting breast cancer. A woman who wears a bra 24/7 is 125 times more likely to develop breast cancer than a woman who rarely or never wears a bra. Those who sleep in their bra, they found, have a 75% chance of developing breast cancer at some point in their lives.

Harvard did a study in 1991 that showed greatly increased incidence in breast cancer in those who wear bras over those who don’t.

Sleeping Without Bra May Reduce Breast Cancer
Even limiting the wearing of tight bras can make a difference. Women who wear a bra more than 12 hours, but not to bed, have an one in seven risk of breast cancer, but wearing it less than 12 hours reduces her risk to one in 152, while cutting it out completely carries a one in 168 risk. Midwife Lisa Goldstein recommends that women take off the bra when they get home and massage the tissue that has been compressed to get the lymphatic fluids flowing properly.

It is notable, also, that many studies have linked breastfeeding with up to a 50% reduction in breast cancer, yet nowhere do the pink public service announcements and fund-raising campaigns tell young women this valuable information. [Source]