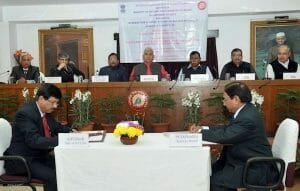 AYUSH Minister Shri Shripad Yesso Naik  and Minister of State of Railways, Shri Rajen Gohain witnessing the signing ceremony of an MoU for comprehensive Introduction of Ayush System in  Hospitals of Railway.

Under the terms of the MoU signed, Ministry of Railways will arrange for providing logistics and infrastructure in the form of Land & building, Equipments, Furniture, AYUSH medicines and consumables as well as Manpower as per its guidelines.

It will organize and provide orientation training to newly recruited AYUSH Doctors and AYUSH Paramedicals. Ministry of AYUSH in turn will provide all other technical inputs required for introduction of AYUSH Systems in the five identified Railways Hospitals.

The Ministry will also provide technical knowhow regarding the pharmacopoeia, medicine inventory, hospital planning. Guidelines of manpower requirement and Recruitment Rules; Procedures of AYUSH Doctors, AYUSH Para medical required for introduction of AYUSH Systems in five Railway  Hospitals including the guidelines for contractual AYUSH doctors and paramedical staff would be aided by MoAYUSH.

Speaking on the occasion MoS Shri Mnaoj Sinha said that ensuring wellness of Railway employees is of prime concern. The traditional knowledge of AYUSH systems can be harnessed to particularly help the vast majority of railway staff who are required to put in stressful field duties on site. MoS Sh Rajen Gohain said cooperation of Ministry of Railways and Ministry of AYUSH would go a long way in propagating the age old benefits of traditional systems of medicine. Sh Gohain added that he is particularly aware of the good work and benefits being availed of the AYUSH services at the Guwahati Railway Hospital.

Minister of State (I/C) for AYUSH, Shri Shripad Yesso Naik pointed out that AYUSH Systems of Medicine offer safe, effective and complete holistic treatment in many diseases. He said the proposed collaboration would play a pivotal role in offering healthcare needs to the people serving the railway sector.