CENTRAL COUNCIL FOR RESEARCH IN HOMOEOPATHY(
(An Autonomous Body of Ministry of AYUSH, Govt. of India) 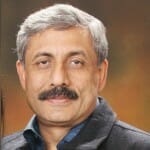 This has reference to the article ‘Homeopathy and astrology useless, says Nobel laureate’ in the Delhi edition of your daily ‘The Hindustan Times’, dated 7th January 2016, which reports Dr. Ramakrishna’s views on Homoeopathy being bogus and useless. However, it seems that many recent researches of Homoeopathy have somehow missed Dr. Ramakrishna’s attention.

There is sufficient body of evidence to counter the argument that homeopathy medicines are placebo merely because they are diluted beyond the extent of traceable molecules. A team of scientists from IIT, Bombay, headed by Prof. Jayesh Bellare, was able to show presence of nanoparticles of the source substance in the homoeopathic high dilutions. Further, a collaborative study of Central Council for Research in Homoeopathy with Bose Institute, Kolkata on cancer on animal model found that homeopathic medicines are able to kill the cancer cell by modulating the expression of genes. The ‘mere placebo’ argument against Homoeopathy, therefore, stands little basis, as several plant, animal and even in-vitro and in-vivo models have shown homoeopathic dilutions to be effective. It is scientifically accepted that ‘placebo’ or ‘pleasure’ factors have no role to play in such models of research. India has actively been contributing to this part of research. The last decade’s data of exclusive database, ‘HomBRex’ indexing the studies on animals and in-vitro models in homoeopathy, reveals that India was the second highest contributor of basic research in Homoeopathy.

Further, several papers on clinical research support the positive effects of Homoeopathy in various clinical conditions. Homoeopathy has been serving the people of India since the early 20th century, and being safe, economical and effective, Government of India fully understands, and supports, its influential role in improving the health scenario of the country. India has a well-supported infrastructure of Homoeopathy, with over 2.7 lakhs practitioners and 180 homoeopathic medical colleges. The users of Homoeopathy have also increased over these years, which speaks highly of the growing popularity of this system. This clinical effectiveness is now further being strengthened by scientific evidence, for which Central Council for Research in Homeopathy, an autonomous body of homeopathic research under Ministry of AYUSH, Government of India, is making all efforts. Many researches with innovative designs and contemporary measures are either ongoing or in pipeline.

Despite that much basic and clinical evidence basis in favour of science behind Homoeopathy, Homoeopathy faces the brunt of scepticism and fixed notions of some scientists who are not abreast with the latest advances in Homoeopathy research. On the other hand, the scientists from various fields, like chemists, physicists, microbiologists and biotechnologists have joined this intriguing field of homoeopathic research and with the added momentum generated out of this skilled brigade of scientists, the coming decades will be providing many solutions to the unresolved queries regarding science of Homeopathy, that might even have far-reaching impact on mainstream medicine.

Further, it has been realised that many scientists having a prior notion on Homoeopathy, have not been exposed to the recent advances in the science that could positively influence their thinking process. To discuss the intricacies of scientific research in Homoeopathy, Council has decided to support a conference on ‘Science behind Homeopathy’, in Kolkata being organised by Centre for Interdisciplinary Research and Education. Reputed Indian and international scientists who have explored various aspects of homoeopathic science through their subjects of interest, will be invited to attend this conference. Council would like to call upon all scientists who have some views on Homeopathy, favour or against, to attend the conference for meaningful deliberations and exchange of information.

The statement by Dr. Ramakrishna has directly questioned both, the strong pool of evidence in favour of Homoeopathy and, the belief of so many people who have been treated with Homoeopathy. I request your esteemed paper to publish this response to the Nobel laureate’s statement, in the best interest of the science and its ultimate beneficiary – the common man.