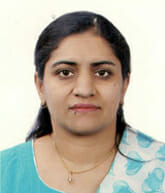 She is an Officer of the Indian Administrative Service (Kerala Cadre), 1997 Batch . A Medical Doctor by academic training Dr Sharmila has done Masters in Public Administration at Maxwell School of Policy & Public Affairs Syracuse University, USA.

In her career spanning more than two decades, she had held many important portfolios at the State Government and Central Government earlier. In the State Government, she had worked as Secretary (Expenditure) Government of Kerala, District Collector of Kottayam and Wayanad districts, Director of Social Welfare and various other capacities.

At the Central Government, she was the Director in the Prime Ministers Office and as Member Secretary of the National Pharmaceutical Pricing Authority. She served as a Director of Nitta Gelatin India Limited and Director at Geojit Financial Services Limited. She was the Managing Director of Kerala State Industrial Development Corporation Ltd and Secretary (Industries) Government of Kerala.

She also to hold the charge of Director, Kerala Medical Service Corporation