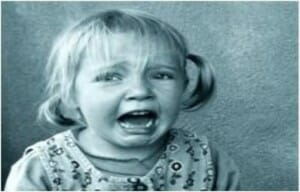 Why does a child cry?
The first sound that a newborn makes is that of a cry. This is a good sign; it means that he is healthy and breathing well. During the first few weeks, crying is the only way a baby can communicate, and soon the mother is able to distinguish between different cries. At first you wonder if he is hungry, wet or sick. Or does he have indigestion.

Most mothers interpret prolonged or frequent crying as being caused by stomach-ache because they find the child’s abdomen distended and hard. This is normal because any child who cries a lot tends to swallow air, causing abdominal distention. The mother may not realize this and looks for the cause elsewhere.

What are the common causes?
Crying while feeding
Many newborn babies cry when they are being fed. Often the mother feels that her milk does not suit the child because of something in her diet. Some even change over to bottle feeds. Do not stop breastfeeding. Such crying is not due to any defect in the mother’s milk or diet. It is usually due to the nose getting blocked by the breast, retracted nipples, insufficient flow of milk or some other cause. All you need to do is to be patient and soon the child will stop crying and you will find the cause of discomfort.

Hunger
The most common cause of crying is hunger. Mothers who breastfeed are often uncertain as to whether or not the baby is getting enough milk. In most cases there is enough milk in the breasts but the baby does not suck sufficiently or goes to sleep while sucking.
With a bottle-fed baby, it is much easier to measure the exact quantity that he is taking at one feed. One of the most common causes of hunger in bottle-fed babies is that the milk is too dilute. Many mothers dilute the milk, as they feel that undiluted milk will upset the baby’s tummy.

If you are using powdered milk, then you will have to add water. Follow the instructions on the tin as far as mixing is concerned. Sometimes the baby may need more milk for his age than what is indicated on the tin.

Blocked nose
A common cause for the baby’s discomfort is some obstruction in the nose resulting in breathing difficulty. Due to climatic changes many babies suffer from blocked noses because the secretions in the nose dries up. As the infant is unable to breathe easily through his mouth, a blocked nose makes him uncomfortable resulting in his becoming cranky and irritable.
Try to ensure that the infants nose is clean and not blocked. Make his nose moist and clean his nostrils with a cotton bud. Do this about 5 to 10 minutes before a feed to help him breathe more easily at the time of feeding.

Infant colic
Infant colic is much more common in bottle-fed babies than breastfed ones. The child screams and his face becomes red and he flexes his legs. He may pass gas, with some relief. The cause of the colic is not certain. Some of the causes are food allergy, excess of carbohydrates in the diet and over or under-feeding. Whatever be the cause, the colic will disappear in due course. It rarely occurs after the baby is over three months old.

When the baby keeps crying, try to relax. Put him to the breast. If he is bottle-fed use a pacifier to quieten him. If this does not work, give him a little glucose or sugar with water. If the baby cries excessively, pick him up and rock him gently as this may help him sleep. If these methods do not work, consult your doctor and he may prescribe antispasmodic drops or a sedative for the child.

Personality of the child
Some children are placid, contended and happy with themselves and seldom cry. Others are aggressive, alert and will not accept the slightest change in their routine or a minimal discomfort. They cry to show their resentment or to demand the comfort they want. Some are happy lying in the cot but others want to be picked up. Some cry because of exhaustion and fatigue, others cry through boredom. A child left in the room by himself will stop crying as soon as he sees other people around him. A child left in a cot alone may cry but will be happy when taken out in a pram.

Stimulation
Over-stimulation can also make a child cry. Over handling by too many members of the family is quite common. Initially the child feels happy, but later he gets tired and starts crying. Similarly, cold hands, loud noises, too much tickling and even glaring lights can make the child uncomfortable and cry. Excessive physical handling like throwing the child up and down or shaking his head vigorously in affection or even head massage can cause harm to the child.

Crying at the unexpected
In slightly older children causes of crying can be different. One can cry at an unexpected situation. Children may cry even when they see a stranger or when they see somebody with a beard. The same thing may happen on the swings; the moment you push the swing, he starts crying.

What must be done when the child won’t stop crying?
Provide physical contact
Sometimes babies cry simply because they miss the close contact with their mothers that they enjoyed for nine months. A recent study has shown that babies who were carried in the arms or in a baby carrier for at least three hours every day cried much less than those who were carried less. Carrying gives the baby a sense of physical closeness with the mother and it may help the mother to cater better to her baby’s needs.

Respond promptly
Crying is the only way a baby can communicate with the world around him. When you respond immediately to your baby’s cry, you give him a sense of control over his surroundings and a feeling that he is important to you. There will be occasions when you feel that your prompt response has not made any difference. Your baby will continue crying no matter what you do.
Remember that not responding to your baby is not an option, as prompt response will eventually reduce crying. Some studies have shown that babies, whose mothers responded to them promptly in infancy, cried less as toddlers. The longer a baby cries, the longer it takes to stop his crying. For proper emotional growth, it is extremely important that the child should be picked up whenever he wants. Avoid this only when you feel he is forming a habit.

Children do not cry unless they want something or want to convey something. So, when a child cries, be sympathetic and try to understand what he wants. A little patience and understanding on your part will go a long way in establishing a healthy rapport between you and the child.

Homeopathic treatment:
Chamomilla
Chamomilla child is sensitive, irritable, peevishness and whining restlessness. Piteous moaning because he cannot have what he wants. Child can only be quiet when carried about and petted constants. Child wants many things that he refuses again and start crying; weeping and wailing during sleep. The child is never still, it is never satisfied with anything it is doing. The child does not want to be touched and is intensely irritable, very often screaming with pain. When the child cries there is a reason to believe that it has earache, headache, colic or difficult dentition.

CINA
Cina child will scream and cry when handled but once the preliminary discomfort of handling is over the child is quite peaceful. Often the cina children will cry for more food immediately after a meal and the child often suffer from nightmares and night terrors, cries out, screams and wakes frightened. Cough in cina is so violent as to bring tears and sternal pain. After coughing, moaning, anxious, gasp for air and turn pale.

CAUSTICUM
Causticum type of child are very sensitive. Least thing makes it cry. They are not sensitive to pain but are particularly sensitive to any emotion disturbance. Often these children will cry because they think you are hurting another child. It is the idea of pain, which affects them, rather than the actual pain to themselves and they often stand pain quite well, but cannot bear to see another child crying.

RHEUM
Rheum baby is impatient and vehement, ugly and impossible to satisfy. He screams, kicks and makes himself decided unpleasant. He cries and tosses about all night. Desires various kinds of food but cannot eat them, become repugnant. He desires many things and cries. He dislikes even favorite playthings. The baby cries due to difficult dentition.

PULSATILLA
Pulsatilla children are very typical. They are liable to flush up from any emotions very often going pale afterwards. The child is always full of tears. They are mild, gentle, yielding disposition, sad, crying readily, weeps when talking, changeable etc. They hang about, becomes either tearful or irritable and are likely to get digestive upset. Pulsatilla baby wants this and that and are never satisfied, they want amusement. When not amused, has a pitiful cry. Pulsatilla child cannot relates her complaints without weeping.

BELLADONA
Belladona is indicated when the infant starts suddenly from sleep and begins to cry violently. Child cries due to sudden and violent pain; child is restless, crying out, gritting of teeth. Screams out in sleep. Cries without apparent cause.

COFFEA CRUDA
Coffea child tosses about in agony. He is a great subject to ailments arising from sudden emotions and pleasurable surprise. He weeps from delight. Weeping alternates with laughing. There is great sensitiveness to pain. The child screams and cried due to pain and driven to despair.

ACONITE
Constant crying with anxious looks and great uneasiness, whines and frets, constantly gnawing at his fingers or something else. Child cries during dentition or in brain and chest affection. Child starts crying as if in a fright and afraid to go to bed.

ARSENICUM ALBUM
Cries during or after nursing, as soon as the child begins to take food. Child wants to be carried fast. Child is very restless, changes place continually, despairs drives him from place to place.

ARNICA
Cries everytime it coughs or even before as if dreading to cough. Child wants to be carried.

COLOCYNTH
Cries hard, cannot be pacified, writhes and curls up double with colic better when pressing hand on belly.

CUPRUM
Breathing ceases when crying without being angry, afraid of everyone who approaches him.

STANNUM
Cries with colic, better by carrying it on belly, resting on the nurse’s shoulder or pressing firmly against it.

THUJA
Extreme obstinacy, child throw itself angrily upon the floor. When in the least opposes, screams, cannot get its breathe.

ZINCUM MET
Screams with jerk during sleep, rolls head from side to side and if awakens express fear.

PSORINUM
It will help sick babies who will not sleep they or night but worry, fret, cry, or who are good and play all day but restless, troublesome, screaming at night.

SYPHILINUM
Crying infants when they develop this propensity immediately after birth and continue to cry.