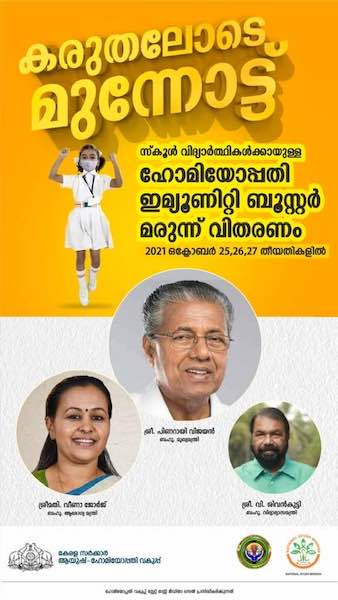 Earlier Ministry of Ayush warned this hepatologist for his false allegations against Ayurvedic Medicines.

A division bench led by chief justice S Manikumar disposed the petition filed through advocate MS Vineeth after the state government submitted that it has issued in-principle approval to homeopathy department’s plan to administer homeo preventive medicine and that the project is named ‘Karuthalode Munnottu’.

The project named “Karuthalodu Munnottu” (meaning, to move forward with caution) has been started by the State, its Ministry of General Education, the Ayush Department, and the Directorate of Homeopathy as part of which the homeopathic drug is being administered to the kids, which the government claims to be an immunity booster against COVID.

The doctor had moved Kerala High Court against the proposal alleging that there is no scientific data to prove the efficacy or safety of homeopathic preventive medicine.

The petitioner claimed to have sent certain samples of the homeopathic drugs including Ars. Alb. 30 to labs for testing after finding a positive correlation between ingestion of certain homeopathic immune boosters and liver damage.

In response to the plea, the government produced before the court a copy of the order issued by it directing for obtaining the consent of parents before administering homeo preventive medicine to children. Through the order, the government had also directed the homeopathy director to procure and distribute the medicine.

Subsequently, the court on Thursday disposed the petition