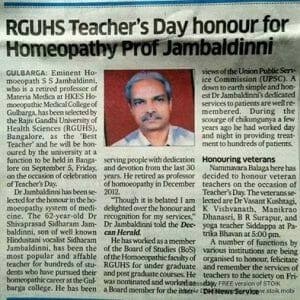 Gulbarga: Eminent homoeopath Dr DD Jambaldinni, Professor of Materia Medica at HKES Homoeopathy Medical College, Gulbarga has been selected by the Rajiv Gandhi University of Health Sciences Bangalore, as the best teacher and  honoured by the University at the function held in Bangalore on Setemper 5, on the occasion of Teachers day celebration.

During the scourge of chikungunya a few years ago he had worked day and night in providing treatment to hundreds of patients.

Dr.Jambaldinni is given recognition by RGUHS as “best teacher” on teachers day though he is beyond such recognitions as we ,his students have already recognised his stature as a teacher & very humble & wise guide by our love respect & good wishes for him since decades but recognition from Rajive Gandhi university is something to cheer about but I know sir as usual in his noble way will take it with utmost “philosophic calm”