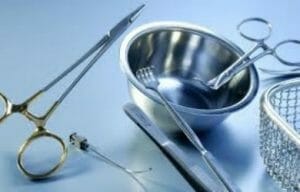 SURGERY
Surgery is an art. It is that branch of medicine which is concerned with the repair, Removal or replacement of the diseased tissue; in other words, any cutting, suturing and repairing of human tissues.

By the fifteenth century – Rogerius Salernitanus composed his Chirurgia, laying the foundation for modern Western surgical manuals up to the modern time.

Late in the nineteenth century, Bachelor of Surgery degrees (usually Ch.B.) began to be awarded with the (M.B.), and the mastership became a higher degree, usually abbreviated Ch.M. or M.S. in London, where the first degree was M.B.B.S

Navalsurgeons were often barber surgeons, who combined surgery with their main jobs as barbers.

Developments of modern surgical approaches – control of bleeding, control of infection and control of pain (anaesthesia), Cauterization , Ligatures, or material used to tie off severed blood vessels, are believed to have originated with Abulcasis in the 10th century and improved by Ambroise Paré in the 16th century.

Hungarian doctor Ignaz Semmelweis -Combating  infection was made in 1847.

British surgeon Joseph Lister began experimenting with using phenol during surgery to prevent infections. Lister published his work as a series of articles in The Lancet (March 1867) under the title Antiseptic Principle of the Practice of Surgery.

In Britain by John Snow. Beginning in the 1840s, the discovery of effective and practical anaesthetic chemicals such as ether and chloroform. In addition, the discovery of muscle relaxants such as curare allowed for safer applications.

Conditions treated by surgery :  Surgery is used to both as a treatment, and as an aspect of treatment, for many conditions, including:

So surgery does not deal with that something unknown which is residing in the body and which can not be located.

But in case of injuries caused to the body from without, the surgical treatment is necessary only to the extent that the parts injured require mechanical aid whereby the external obstruction to cure is removed mechanically. But in such injuries also the living organism requires active dynamic aid to put it in a position to restore the organism to health and homoeopathic treatment is called for.

On one hand surgery can play an important role in medicine since some conditions such as congenital deformities, structural problems, severe injuries, or life-threatening pathological conditions are simply not treatable without it.

Homoeopathic surgery is that form of treatment where the so-called surgical cases can be averted, managed completely or helped in the pre-operative & post-operative stages with homeopathic medicines only.

Homoeopathy in pre and post-surgery:
Surgery, at best, is an unpleasant process. Not only does the surgical wound cause pain, but general anesthesia causes its own side effects. Once it is established that surgery is necessary, homeopathic remedies can play a vital role in reducing any complications that may arise as well as accelerating healing and recovery.

Reduce fear and anxiety prior to surgery are Aconitum Napellus: Gelsemium

Excess bleeding during surgery
If surgery poses the potential for a large loss of blood or undergoing intravenous (IV) therapy –     Arnica montana.