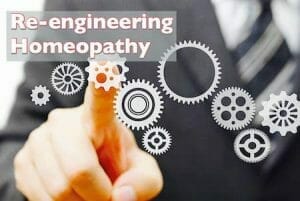 Reinventing is called for in many areas in homeopathy.

Let me give some background.
If we look at the history, the conventional medicine (earlier called as allopathy) was so primitive around the time homeopathy was born, that it was called as ‘orthodox medicine’! However, with the advances in the basic sciences such as physics, chemistry, and biology there evolved various streams of engineering. With that evolution, the then called ‘orthodox medicine’ evolved incredibly and it got transformed into ‘modern medicine’. Antibiotics, vaccines, advances in pharmacology and engineering-led diagnostics and surgery evolved from 1880 to 1980 and beyond.

Unfortunately, during the same period, homeopathy, which was originally born and evolved as a ‘newer’ form of medicine in 1796 to 1840, did not adopt the advances in the basic sciences in the later years. Hahnemann kept innovating himself until his death.

All in all, incidentally, homeopathy became more philosophical and theoretical; and less scientific.

Reinventing is called for in many areas in homeopathy.

2. New drugs:
How can any system of medicine depend entirely on the drugs developed over 150-210 years ago? We certainly need new drugs and required protocols for New Drug Development which are grossly missing.

I’ve been discussing standards for new drug development in many forums since almost a decade. I’ve also submitted the suggested protocols to concerned agencies.

4. The Law of Similars:
Is it a ‘law’ or a rule or a hypothesis or an observation or a theory?

Does the law of similars always work? If not, why does not it work always? What are the prerequisites?

Understanding this law in the light of physics, chemistry and biology will be a real reinventing.

5. Similimum
It needs to be understood in today’s scientific language. How can we have diverse opinions about the similimum which is believed to be unique? Is the concept of similimum relevant?

6. Single dose vs multiple doses:
The fundamentals of posology must be better explored with the efficacy studies using molecular biology rather than mere philosophical theorising.

8. Miasms
Reinventing the Miasms clearly in the light of genetics, immunology and pathology is not difficult. For how many more decades shall we keep confusing the new generations of homeopathy students without reinventing the miasms?

These are some of the areas where reinventing is called for. Some more points could be discussed if there is interest. I’m sure the readers will have their inputs in this direction.

Please give your suggestions below