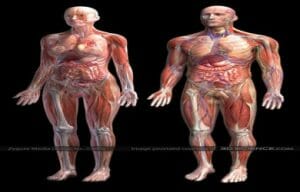 Erb’s Paralysis …Forcible widening of the angle between the head and the shoulder, upper trunk at Erb’s point sustains injury resulting in Erb’s paralysis. This leads to Porter tip deformity.

Klumpke’s paralysis….Hyperabduction of arm results in damage to C8 Tl and sometimes Cl roots. Paralysis affects intrinsic muscles of hand and flexors of wrist and fingers.

Injury to roots…. (Tearing away of 1st thoracic root) associated with cervical sympathetic paralysis—Horner’s syndrome. This is characterized by constriction of pupil, ptosis, apparent enophthalmos, anhidrosis on affected side of face and netk.

Crutch paralysis….Radial nerve is damaged due to pressure of crutch on radial nerve.

Sleep paralysis….Median and radial nerves suffer due to pressure effet while the patient is asleep under the influence < alcohol.

Winging of scapula ….Due to paralysis of long thoracic nerve common in people carrying heavy weights on shoulder for the nerve is exposed to injury in posterior triangle, (porter’s paralysis).

Ape hand is due to median nerve injury proximal to origin of its muscular and anterior interosseous branches.

Pointing index finger …lesion produced due to injury of median nerve just above the middle of forearm. There is on| weakness in flexion of index finger as the nerve to that part of flexor digitorum superficialis is given at about the middle forearm.

Carpal tunnel syndrome is due to pressure on median nerve in carpal tunnel.

Ulnar claw hand is due to injury to ulnar nerve….Mild degree of clawing observed which leads to extension of 1 st phalanges of 4th & 5th fingers and flexion of 2nd and 3rd phalanges.     .

Branches of Internal carotid artery are :

Branches of Vertebral Arteries are :

Branches of Basilar Artery are :

Most common age group for appendicitis is teenagers and young adults, because at this age the lumen of appendix is very narrow.

Ampulla is the widest portion of rectum, lying just above the pelvic floor. It is usually empty because faeces are stored in sigmoid colon.

The cardinal features of large gut (i.e taeniae, appendices epiploicae and sacculations) are absent in rectum.Houston’s valves are semicircular rectal folds present at inner wall of rectum. They are three in number. because of mesenteric attachment, liver moves with diaphragm during respiration.

Anatomically right and left lobe are separated by a line passing along falciform ligament. The  line of division of surgical lobes passes from gall bladder fossa to inferior venacava. Liver has been divided into eight segments, which has got importance in segementectomy of liver, jixamural portion in the narrowest portion of CBD.

Mucosal fold in cystic duct is called ‘Valves of Heister’, which maintains the patency of cystic duct. G3 can undergo distension upto 50 times.

Posteromedial wall of neck of Gall bladder is dilated, and is known as Hartmann’s pouch.

Portal vein is formed by union of superior mesenteric vein and splenic vein behind the neck of pancreas at the level of L2 vertebra.

Space between the external oblique aponeurosis and membranous layer of superficial fascia near inguinal region is called “superficial inguinal pouch”.

Superficial inguinal ring is an opening in the external oblique aponeurosis located just above and lateral to crest of pubis.

Deep inguinal ring is a gap in transversalis fascia present about 1.25 cm above mid inguinal point.

Space between hip bone and inguinal ligament is pelvifemoral space. Through this vessels, nerves and two muscles pass from abdomen to thigh.

Inguinal canal is a musculo aponeurotic tunnel extending from deep inguinal ring to superficial inguinal ring. It is about 4 cm long.

Rectus sheath : An aponeurotic sheath which envelopes the rectus abdominis muscle. It prevents bow stringing of the muscle.

Carcinoma head of pancreas speedily involves the bile duct and may cause jaundice or may press on portal vein and cause ascites or obstruct pylorus.

Blood less zone of Brodel is not blood less in kidney – Hence radial or intersegmental incisions are preferred during surgery on kidney.

Safe position to divide the ureter is 2 cm below the bifurcation of common iliac artery as the inferior vesical artery supplies the lower part.

Prostatic tumors may spread to vertebrae as the prostatic venous plexus drains to inferior venacava through sacral veins and vertebral venous plexus.

Removal of metastatic lymph nodes from the lateral pelvic wall may cause damage to obturator nerve (as it runs in the extra peritoneal tissue of lateral pelvic wall) resulting in weakness of adduction of thigh on the affected side.

Abscess in the rectouterine pouch can be drained through posterior vaginal wall at posterior fornix.

Herniation to ischiorectal fossa is through “hiatus of Schwalbe”.

All muscles of anterior group of thigh are innervated by femoral Nerve (L2,3,4)

Knee joint is Largest and most complex joint of body.

Its highest stability is achieved in full extension.

Oblique popliteal ligament is a lateral extension of semimembranous tendon.

Cruciate ligamens give anteroposterior stability to the knee joint.

Collateral ligaments give side to side stability.

Locking of knee occurs by Medial Rotation of lower and of femur on tibia during terminal stages of extension, when feet are  supporting the body weight.

Lamina propria of the intestine is the chief site for production of the secretory immunoglobulin (IgA). Secreted IgA coats the mucosal surface and prevents the attachment of the antigen to the intestinal cells. IgA is important for local immunological process through out the body.

Villi are absent over the Payer’s patches.

Epithelium covering the Payer’s patches has “M” cells which help in immune responses.

Lining of terminal bronchioles is simple columnar or cuboidal epthelium with or without cilia but without mucous glands or goblet cells in the wall.

Interalveolar septum in between the alveoli is composed of lining cells of adjacent alveoli and structures interposed between them (capillaries).

Inverted retina is characteristic of all vertebrates.

Ora serrata is the scalloped anterior margin of neural retina.

Striated ducts of the salivary glands modify the composition of alveolar secretions.

3 cells of the islets comprise 60-90% of all the islets cells. They are in the central part, a cells are located in peripheral part.

Terminal bronchioles are the finer divisions of conducting part of respiratory system which are 0.5 mm or less in diameter.

Sertoli cells of the testis produce steroids, secrete fluids including androgen binding protein, inhibin in adult and Mullerian inhibiting hormone in the fetus and estrogens.

Foramen of Morgagni (in duaphragm) is also called Larry’s space.

One type of entero endocrine cell may become numerous and produce carcinoid tumour, characterised by excessive secretion of serotonin.

Premature infants suffer with respiratory distress syndrome due to lack of type II pneumocytes in lungs.

Talus is the key stone of the arch. It receives body weight and transmits it to the arches below.

Body to the axis (C2) bears a strong process getting vertically upwards from its superior surface. This process is “odontoid process” which is the detached centrum of atlas.

Bodies of 5th to 8th thoracic vertebrae on left side show flattening due to pressure of thoracic aorta.

Failure of fusion of two arch centres posteriorly results in “spina bifida” occurs commonly in lumbar region. If the deformity is not associated with neurological abnormality it is “spina bifida occulta”.

When the defect involves one or several arches, spinal cord with meninges may prolapse (meningomyelocele).

Fractures of spine most commonly involve T12 LI and L2 — cause is usually flexion compression type of injury.

Disc prolapse or prolapsed intervertebral disc is protrusion of nucleus pulposus posteriorly into vertebral canal through posterior part of annulus fibrosus either due to trauma or degenerative changes in the annulus. Most common sites are L4L5 or L5/ SI.

Plane of greatest pelvic dimensions is at the level of pelvis where the cavity is most spacious. It’s antero posterior diameters taken from a point between 2nd & 3rd sacral vertebrae and middle of symphysis. Children under 9 years and males have anthropoid type of pelvis (dolichopelvic).

Peculiarities of clavicle are :-

The largest cerebellar efferent bundle is the superior cerebellar peduncle. This is formed by fibres from the globose, emboliform and dentate nuclei.

Mundinus or Mondino d’ Luzzi is called the Restorer of Anatomy

Vesalius is called the ‘reformer’ of anatomy

Raphe is defined as a fibrous band made up of interdigiting fibres of tendons or aponeuroses.

According to Wolff’s law, the bone formation is directly proportional to stress and strain

Glioblasts are stem cells that differentiate into microglial cells

Carpal Tunnel and its contents

Tendon of Flexor Carpi Radialis with its synovial Sheath

Cribriform Fascia is pierced by the following structures.

Artereis which do not anastomose with their adjacent one are called end arteries. e.g.

(i)   The best example being central artery of retina.

(iv)  Arteries of spleen, kidney, and metaphysis of long bones.

— Upper margin of the ant. surface of right ventricle.

— Post, surface & the auricular appendage of the left atrium.

Tributaries of the coronary sinus

A.Supraduodenal part (in the free margin of lesser omentum)

3. To the left: hepatic artery.

3. To the left: gastroduodental artery

1. Anteriorly :    a groove in the upper and lateral parts of the posterior surface of the head of the pancreas.

A.  Relations Common to the Two Kidneys

1.The upper pole of each kidney is related to the corresponding suprarenal gland. The lower poles lie about one inch  to the iliac crests.

2.The medial border of each kidney is related to (i) the suprarenal gland, above the hilus; and (ii) to the ureter below hilus.

The posterior surfaeces of both kidneys are related to : (1) the diaphragm; (2) the medial and lateral arcuate ligaments; (3) the psoas major; (4) the quadratus lumborum; (5) the transversus abdominis; (6) the subcostal vessels; and (7) the subcostal, iliohypogastric and ilioinguinal nerves. In addition, the right kidney is related to 12th rib, and the left kidney to 1 lth and 12th ribs.

B.Other Relations of the Right Kidney

1.Right suparental gland; (2) liver; (3) second part of duodenum; (4) hepatic flexure of colon and (5) small intestine. Out of these the hepatic and intestinal surfaces are covered by peritoneum.

2.The lateral border of the right kidney is related to the right lobe of the liver and to the hepatic flexure of the colon.

C.Other Relations of the Left Kidney

1.left suprarenal gland; (2) spleen; (3) stomach; (4) pancreas; (5) splenic vessels; (6) splenic flexure and descending colon; and (7) jejunum. Out of these the gastric, splenic and jejunal surfaces are covered by perotoneum.

2.The lateral border of the left kidney is related in the spleen and to the descending colon.

A.The base is related to the upper pole of the right kidney.

B.The anterior surface is devoid of peritoneum, except for a small part inferiorly. It is related to : (1) the inferior vena cava medially; (2) the liver, laterally; and (3) occasionally to the duodenum, inferiorly.

C.The posterior surface is related to the right crus of the diaphragm.

D.Anterior border. A little below the apex it presents the hilum where the suprarenal vein emerges.

E.Medial border. It is related to : (1) the right coeliac ganglion; and (2) the right inferior phrenic artery.

Relations of Left Suprarenal Gland A.Anterior surface. From above downwards it is related to : (1) the cardiac end of the stomach; (2) the splenic artery; and (3) the pancreas. The upper end may be related to the posterior extremity of the spleen. Near the lower end there is the hilum through which the left suprarenal vein emerges. Only the gastric impression is covered by peritoneum (of the lesser sac):

B.Posterior surface. It is related to : (1) the kidney, laterally; and (2) the left crus of the diaphragm, medially.

C.Medial border. It is related to : (1) the left coeliac ganglion; (2) the left inferior phrenic artery; and (3) the left gastric artery.

Contents
a. Muscles attached to sternum (sternothyroid and sternohyoid)
b. Remnants of thymus gland
c. Vessels