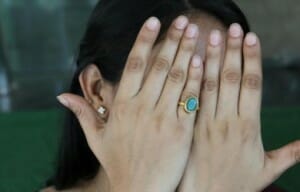 1. FACIAL ARTERY
The facial artery supplies the muscles and tissues of the face, the sublingual gland, the tonsil and the soft palate.

Facial artery arises from the front of the external carotid artery in the carotid triangle above the lingual artery, and immediately above the greater cornu of the hyoid bone. Medial to the ramus of the mandible it arches upwards and grooves the posterior border of the sub mandibular gland. It next turns downwards and forwards between the gland and the medial Pterygoid and reaching the lower border of the mandible hooks round it at the anterior edge of the masseter and enter the face.

On the face it passes forwards and upwards across the mandible and buccinator almost to the angle of the mouth where the pulsations can be felt if the cheek be grasped lightly between finger and thumb. It then ascends the side of the nose and ends at the medial palpebral commissure to supply the lachrymal sac and anastamoses with the dorsal nasal branch of the ophthalmic artery.

Its branches can be divided into cervical and facial groups

Cervical branches
1. The ascending palatine artery
2. The tonsillary artery
3. The glandular branches
4. The submental artery: It branches off as it quite the sub mandibular gland; it runs forwards upon the mylohyoid below the body of the mandible. It supplies the surrounding muscle and anastamoses with sublingual branches of the sublingual artery and the mylohyoid branch of the inferior alveolar artery.

At the chin it turns upwards over the base of the mandible and divides into superficial and deep branches which anastamoses with interior labial and mental arteries, supplying the chin and lower lip.

Facial branches
1. The interior labial artery : Arises near the angle of the mouth; it passes upwards and forwards under cover of the depressor anguli oris and penetrating the orbicularis oris, runs in a tortuous course near the edge of the lower lip between this muscle and the mucous membrane.

It supplies the glands, mucous membrane, and muscle of the lower lip and anastamoses with artery of the opposite side and with the mental branch of the inferior alveolar artery.

2. The superior labial artery: It follows a similar course near the edge of the upper lip, lying between the mucous membrane and the orbicularis oris, and anastamoses with artery of the opposite side.
It supplies the upper lip, and gives off a septal branch, which ramifies on the lower and front part of the nasal septum and an alar branch, to the ala of the nose.

3. The lateral nasal branch. Is derived from the facial artery as the vessel ascends along the side of the nose.

It supplies the ala and dorsum of the nose, anastamosing with its fellow with the septal and alar branches of the superior labial artery; with the dorsal nasal ramus of the ophthalmic artery; and with the infra orbital branch of the maxillary artery.
The lateral nasal artery may be represented by several small ramii it may alternatively arise from the superior labial artery, diverging from its septal branch.

The Anastamoses of the facial artery are very numerous, not only within the branches of the vessel of the opposite side, but in the neck.
With sublingual branch of lingual
With the ascending pharyngeal and
With palatine branch of maxillary

Variations
The facial artery not infrequently arises in common with the lingual artery, constituting the linguo – facial trunk. It varies in size and in the extend to which it supplies the face:
It occasionally ends by forming the submental artery and not infrequently extends only as high as the angle of the mouth or nose.
The deficiency is then compensated for by enlargement of one of the neighboring arteries.
In a series of 110 human fetuses a common linguo-facial – trunk occurred in 43 percent. In 42 percent it did not reach the medial orbital angle, terminating as the superior (20 percent) or inferior (22 percent) labial artery.

2. The superficial temporal artery
Arises in the parotid gland as one of the two terminal branches of the external carotid artery. It emerges from the superior aspect of the parotid gland in front of the ear. It is accompanies in its course by the auriculo temporal branch of V3. The artery divides into a frontal and parietal branch above the zygoma and is distributed to the scalp overlying the frontal and parietal bones, respectively. A transverse facial artery may arise from the superficial temporal artery within the parotid. The transverse facial artery course between the parotid duct and the zygomatic arch to supply the facial tissue over the body of zygoma.

A temporal pulse is frequently taken by compressing the superficial temporal artery against the Squamous part of the temporal bone above the ears.

3. The posterior auricular artery ( Branch of ext. carotid artery)
Arises posteriorly from the external carotid artery it ascends between the superior surface of the posterior belly of the digastric muscle and the parotid gland. It grooves the base of the skull between the mastoid process and auricle.

4. The maxillary (internal maxillary) artery
It runs anteriorly out of the retromandibular position of the parotid gland to supply the deep face as well as portion of the nasal and oral cavities.
(a) The first (Mandibular) portion of the maxillary artery lies on the deep surface of mandibular ramus. Most of its branches pass through the foramina. Its branches are
i) Middle meningeal artery
ii) Interior alveolar artery and tiny tympanic branches and an accessory meningeal artery.
(b)The second (Pterygoid) portion of maxillary artery passes deep to the inferior head of the lateral Pterygoid. its branches
Muscular branches : Include the masseteric, buccal, temporal and pterygoid arteries.
(c) The third (Pterygopalatine or terminal) portion of the maxillary dives into pterygo maxillary fissure to enter the pterygopalatine fossa. Branches are pharyngeal branch, posterior superior alveolar arteries, Sphenopalatine artery supplying the medial wall of the nasal cavity by way of the naso palatine artery and the lateral walls by way of the lateral nasal arteries, the descending palatine artery, and infra orbital artery (supplying facial structures, and anastamosing with branches of the facial artery.

The Internal Carotid Artery
Gives rise to the ophthalmic artery. Its supra trochlear and supra orbital branches supply the forehead and anterior scalp. It anastomoses with superficial temporal, facial and posterior auricular branches of the external carotid artery.