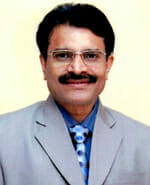 He took his BHMS and MD Hom from Govt. Homoeopathy Medical College. Calicut

He was the first MD Homoeopathy holder in India

Kerala is the first state where a Homoeopath has been appointed on such a high level – Controller of Examinations – Kerala University of Health Sciences – and Dr. P.K.Sudhir is the first Homoeopath.

He served Vinayak Mission University, Salem in various capacities including the Principal of Homoe-opathic College since 2001 till his current appointment.