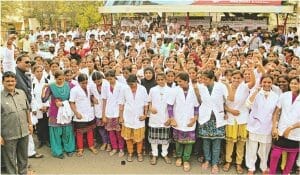 This will be published in Gazette Notification shortly

These regulations may be called the Homoeopathy (Degree Course) Amendment Regulations 2014.

They shall come into force on the date of their publication in the Official Gazette.

These regulations, shall apply to students who shall be admitted for BHMS (Degree Course) from the commencement of the academic session (2013-2014)

Eligibility
Provided that a candidate for admission to BHMS course shall be eligible if he has passed in English and in Physics, Chemistry and Biology subjects at the qualifying examination thus fulfilling eligibility criteria.;

First year exam only in the following subjects

Each college shall impart teaching and training to all the students in all the classes for theory and practical including tutorial and
seminar for minimum of 7 working hours on a working day (including ½ an hour of lunch).”

Attendance: 75% attendance at the minimum in each of the subjects (in theory and practical including clinical) for appearing in the University examinations shall be compulsory”.

Migration during internship training shall not be allowed on any ground.

All applications for migration during the course & internship shall be referred to Central Council of Homoeopathy by college authorities. No institution/University shall allow migrations directly without the approval of the Central Council.

Download the final draft of BHMS regulations including Syllabus