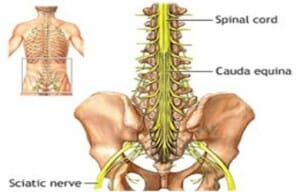 Formation of CSF:
CSF is formed at a rate of approximately 500ml/day, which is about three times the volume of fluid in the entire nervous system. Two- third or more of this fluid originates as a secretion from choroids plexus in the fourth ventricle, mainly in the two lateral ventricles. Additional amount of fluid are secreted by all the ependymal surface of the ventricles and the arachnoidal membranes and a small amount comes from the brain itself through the perivascular spaces that surrounds the blood vessels entering the brain.
Secretion by the choroids plexus depends mainly on the active transport of Na+ ions through the epithelial cells that line the out side of the plexus. The Na+ ions in turn pull along large amount of Cl- ions as it attracts the negative charges. These two increases the quantity of osmotically active NaCl in CSF, which then causes almost immediate osmosis of water through the membrane thus providing the fluid of secretion.
Less important transport process moves small amount of glucose into the CSF and both K+ and HCO3- ions out of CSF into the capillaries.

Flow of CSF:
It passes out of the fourth ventricle through three small openings, two lateral foramen of Luschka and a midline foramen of Magendie, entering the cisterna magna, a large fluid space that leis behind the medulla and beneath the cerebellum. The cisterna magna is continuous with the subarachnoid space that surrounds the entire brain and the spinal cord. Almost all CSF then flows upwards from the cisterna magna through the subarachnoid space surrounding the cerebrum. From here the fluid flows into multiple arachnoid villi that project into large sagittal venous sinus and other venous sinuses of the cerebrum. Finally, the fluid empties into the venous blood into the surface of the villi.

Obstruction to the flow of CSF causes Hydrocephalus; which means excess of water in the cranial vault. This condition can be divided into two types:
(a) non -communicating – caused by block in the acqueduct of Sylvius, resulting from atresia before birth in many babies or from a tumour at any age. As fluid is formed by the chroid plexus the volume of three ventricles increases greatly. This flattens the brain into a thin shell against the skull. In new born babies the increased pressure also causes the whole head to swell because the skull bone still have not fused.
(b) Communicating – caused by block of fluid flow in subarachnoid space around the basal regions of brain or blockage of arachnoid villi themselves. Fluid therefore collects both inside the ventricles and outside the brain. In infants the swelling of head occurs and in older age group the brain is damaged.

Absorption of CSF
The arachnoid villi are microscopic finger like inward projections of the arachnoidal membrane through the walls of the walls of venous sinuses. Conglomerates of these villi form macroscopic structures called arachnoidal granulations that can be seen protruding into the sinuses. The endothelial cells covering the villi have vesicular holes passing directly through the bodies of the cells. It has been proposed that these are large enough to allow relatively free flow of (a) CSF (b) dissolved protein molecules and (c) even particles as large as red and white blood cells into the venous cells.

Function:
The major function of the CSF is to cushion the brain within its solid vault. The brain and the CSF have approximately the same specific gravity, so that the brain simply floats in the fluid. Therefore a blow to the head moves the entire brain simultaneously, causing no one portion of the brain to be momentarily contorted by the blow.

Contrecoup: When a blow to the head is extremely severe, it usually does not damage the brain on the side of the head where the blow is struck but on the opposite side. This phenomenon is called contrecoup and the reason for this effect is following: When the blow is struck, the fluid on the struck side is so incompressible that the skull moves, the fluid pushes the brain at the same time in unison with the skull. On the opposite side, the sudden movement of the skull causes the skull to pull away from the brain momentarily because of the brains inertia, creating a split second a vacuum space in the cranial vault in the area opposite to the blow. Then, when the skull is no longer being accelerated by the blow, the vacuum suddenly collapses and the brain strikes the inner surface of the skull. Because of this effect the damage to the brain of a boxer usually does not occur in the frontal regions where he is struck most often but in the occipital brain visual regions, often leading to partial blindness.

CSF – Pressure
The normal pressure when one is lying in a horizontal position averages 130 ml of water (10 mm of Hg), although there is a range between 65ml of H2O – 195 ml of H2O.

Regulation of CSF pressure by arachnoid villi:
The rate of formation is nearly constant. The arachnoid villi function like “valves” that allow the CSF and its contents to flow readily into the blood of the venous sinuses while not allowing the blood to flow in the opposite direction. This action allows the CSF to flow into the blood when pressure is about 1.5 mm of Hg greater than the pressure of blood in venous sinuses. When pressure rises higher the valves open more widely.
Conversely in disease state there is dysfunction of valves causing high CSF pressure.
(1) High CSF pressure in pathological conditions like; brain tumour. Here the pressure is elevated by decreasing the rate of absorption of CSF into the blood. For instance if the tumour is above the tentorium it compresses the brain downward, this causes the restriction of upward flow of CSF through the subarachnoid space. As a result the CSF pressure below the tentorium can rise to as much a500ml of water; that is about four times the normal.
(2) In hemorrhage and infection large number of red and white cells suddenly appears in the CSF and they can cause serious blockage of small channels for absorption through the arachnoid villi. This raises the pressure to 400 – 600ml of water.

Measure of CSF – Pressure
The subject lies exactly horizontally on his side so that the spinal fluid pressure is equal to the pressure in the cranial vault. A spinal needle is then inserted into the lumbar spinal canal below the lower end of the cord and is connected to a glass tube. The spinal fluid is allowed to rise in the tube as high as it will. If it rises to a level 136ml above the level of the needle, the pressure is said to be 136ml of H2O pressure or by dividing this by 13.6 which is specific gravity of Hg, that is about 10mm of Hg.

Effect of high CSF pressure on optic disc:
The dura of the brain extends as a sheath around the optic nerve and then connects with the sclera of the eye. When pressure rises in the CSF system, it also raises in the optic nerve sheath. The retinal artery and vein pierce this sheath a few millimeters behind the eye and then passes with the optic nerve into the eye itself. The high pressure in the optic sheath pushes fluid along optic nerve fibres into interior of the eye ball. The pressure in the sheath also impedes the flow of blood in the retinal vein, there by increasing the retinal capillary pressure through out the eye which results in additional retinal oedema. The tissue of the disc are more distensible and it swells – Papilledema.

Blood – Cerebrospinal Fluid Barriers
Many large molecular substances hardly pass at all from the blood into the CSF or into the interstitial fluids of the brain even though theses same substances pass readily into the usual interstitial fluids of the body. Therefore it is said that barriers like blood – cerebrospinal fluid barrier and blood – brain barriers exist between blood and CSF and the brain fluid respectively. These barriers exist both at the choroids plexus and at the tissue capillary membranes in essentially all areas of the brain parenchyma except in some areas of the hypothalamus, pineal gland and area prostema, where substances diffuse with ease into the tissue spaces. The ease of this diffusion in these areas is important because they have sensory receptors that responds to specific changes in the body fluids, such as changes in osmotically and glucose concentration; these responses provide the signals for nervous and hormonal feedback regulation of each of these factors.

The cause of low permeability of the blood- cerebrospinal fluid and blood- brain barriers is the manner in which the endothelial cells of the capillaries in the barriers are joined to one another. They are joined by so called tight junctions. That is, the membranes of the adjacent endothelial cells are tightly fused with one another rather than having extensive slit pores between them as is the case in most other capillaries of the body.

Brain Oedema
One of the most serious complication of abnormal cerebral fluid dynamics is the development of brain oedema. Because the brain is encased in a solid vault, the accumulation of extra oedema fluid compresses the blood vessels, often causing seriously decreased blood flow and destruction of brain tissue.
The usual cause of brain oedema is either greately increased capillary pressure or damage to the capillary wall that makes the wall leaky to fluid. A very common cause of brain compression in which the brain tissues and capillaries are traumatized so that capillary fluid leaks into the traumatized tissues.

Once brain oedema begins it often initiates two vicious circles because of the following positive feed backs: (1) oedema compresses the vasculature. This in turn decreases the blood flow and causes brain ischemia. The ischemia in turn causes arteriolar dilatation with stiil further increase in capillary pressure. The increased capillary pressure then causes more oedema fluid, so that the oedema becomes progressively worse. (2) the decreased blood flow also decrease the oxygen delivery. This increases the permeability of the capillaries, allowing more fluid leakage. It alsoturns off the sodium pumps of the neuronal tissue cells, thus allowing these cells to swell in addition.