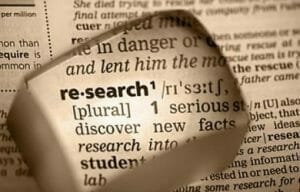 Research Design is a protocol that determines and influences the condition with ground rules for collection and analysis of data.
An appropriate research design is a prerequisite for a valid study

Proposal for research
A carefully made proposal helps in

Selection of the topic for study has to be based on certain criteria.

Priority health problems of the country / community – These are the issues that are listed by an authority like World Health Organisation, Government of India or a locally active health watch group that could be a non governmental organisation or a condition that you encounter very frequently in practice.

Appropriateness of the topic in homeopathic context – The topic selected should be relevant for treatment with homeopathy.

Professional development of the learner – The topic selected should provide sufficient scope for the research scholar to grow as an individual and professional.

Before you select the topic for research, deliberate on its importance in your own thinking, then consult your peer group, guide / supervisor and some learned people from outside your discipline

Infra structure for designing a research

Research is essentially a process that enables testing of hypothesis

Second – Pilot Study:
To assess whether you have sufficient infrastructure, financial support and necessary human resources including appropriate and sufficient sample to carryout research.

Analytical research makes use of the data that is already available and analyses these to evaluate and make discoveries.

2. Fundamental or applied research
Fundamental research is concerned with developing theories and making generalisations. It  may imply generating evidence for principles such as Homeopathic Pathogenetic Trials, Drug Dynamisation, etc.

Applied research is application of fundamental principles to evaluate their practicality or to find solutions through the laws of basic sciences. It implies discovering application of existing principles.

4. Conceptual or experimental research
Conceptual research is concerned with abstract ideas. It is more in tune with studies based on philosophy.

Designs of study
Next phase of program is to identify which type of study is more appropriate for the research question and indicate how data will be collected and which statistical test will be used to analyse data.

There are two broad research designs – experimental and correlational

Experimental design is the one where variables can be clearly categorised as dependent and independent.

Correlational design there is neither dependent nor independent variable; each of the variables has some sort of affinity without being influential on each other.

The type of study where same group of subjects is used is called as Same Subject Design.

More than one group of subjects is involved, such study is referred to as Different Subject Design.

Different Subject Design is the one where each of different groups of subjects is simultaneously subjected to one independent / experimental variable at a time to assess their reaction .

a.   Case-control study
b. Cohort study

Case control studies are conducted to assess whether exposure to a certain risk factor has caused a disease in a population. These are retrospective, interventionist studies and are also called as trohoc studies (the reverse form of cohort).

The advantage of case control studies is that they are faster and economical as compared to cohort studies. They are also suitable to investigate for rare forms of diseases.

The disadvantage is that they may not be accurate as the time gap of exposure and disease development.

Cohort studies are used to investigate disease causation or to estimate what are the risk factors for a disease. A number of subjects are selected for study and are divided into two groups – one group that is exposed to a risk factor that is supposed to cause a disease, and the other group, which is not, exposed that risk factor. It has to be ensured that none of the subjects have that disease at the beginning of the study and that all the subjects share similar characteristics. These subjects are followed-up over a period of time and data from both the groups are collected, analysed and interpreted to describe the outcomes of study.

Randomised Controlled Trial is a program in which study is done on two groups for assessing the comparative value of the treatment given. These two groups are termed as control group and experimental group. Control group is the one, which is given a standard treatment modality or placebo. Experimental group is treated with the medicine that is to be tested for its effect – that is homeopathy.

Single blind RCT
These studies are usually done with a ‘blinding’ effect, i.e., often the subjects – both control and experimental – will not know who is getting the medicine and who is getting the placebo or the standard treatment. This technique is called ‘single blind’ study.

Double blind’ RCT
In case both the attending doctor / supervisor as well as the subjects (both experimental and control) are aware as to who is getting what, it is called ‘double blind’ study.

The advantage of RCT is that it allows for the evaluation of effectiveness of a treatment. The evidence that it provides for the effectiveness is strong. The disadvantage is that it is expensive and complicated to organise and a large sample is needed.

Systematic reviews are the studies that are done to assess the cumulative value of a group of experimental studies.

Meta-analysis is a type of systematic review, in which data from individual research studies is gathered and this data is reviewed.

MAP, which the data is collected from the authors of the original research for the data of sample units (individual patients) or the data is gathered from unpublished literature.

Phase of study
Are the different stages in developing a drug.

There are four phases in the development

Phase I study is the earliest type of studies that are carried out in humans. They are typically done using small numbers (less than 30) of healthy subjects and are to investigate pharmacodynamics, pharmacokinetics and toxicity.

Phase II: studies carried out in patients usually to find the best dose of drug and to investigate safety. Phase III are generally the major studies aimed at conclusively demonstrating efficacy of drug and dose. They are sometimes called confirmatory studies and these are the studies on which registration of a new product will be based.

Phase IV are the studies that are carried out for marketing purposes as well as to gain broader experience with using the new product.