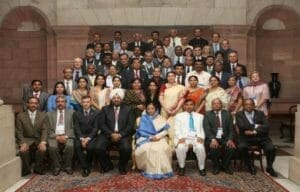 India has the largest homeopathic infrastructure in the world – better called as a Homeopathic Hub of the world
2,46772 qualified homeopaths
UG Colleges : 180 (12371 admissions)
PG Colleges : 35 (1040 admissions)
Government clinics: 7560
Licensed pharmacies : 700
Hospitals : 400
A Separate regulation for UG & PG only in India

European Missionaries, 200 years back, brought homoeopathy to India. But the official recognition was achieved in 1839 when Dr. John martin Honing Berger a French man during his visit to India, treated Maharaja Renjith Singh of Lahore who happened to be seriously ill ailing from Paralysis of vocal cord with swelling of feet and native physicians were unable to improve his health in 1839. Dr. Honigberger later on went to Calcutta and started practice there, where he was chiefly known as the ‘Cholera Doctor’.. There after Homoeopathy showed a steady growth in India and gained the goodwill from India’s Great leaders like Mahatma Gandhi, Ravindra Nath Tagore, Swami Vivekandha, Mother Teresa, Dr. K. R. Narayanan etc.

This therapeutic system came to be practiced in India during the life time of Dr. Hahnemann, the father of Homoeopathy, when a German Physician and Geologist came to India round about 1810 for geological investigations and remained for some time in Bengal where he distributed homoeopathic medicine to the people. Homeopathy came to India during Dr.Hahnemann’s time (1846 establishment of homeopathic hospital at Tanjore & Puddu Kottaii in South India, 1851 – Native Homeopathic hospital and free dispensary at Kolkatta : Sir John Hunter & Dt.Tonnere) but it was only after the Independence of India that a homeopathic enquiry committee was constituted by Govt. of India (1948 report submitted 1949 to the Hon. Health Minister Rajkumari Amrit Kaur)

Dr. Mahendra Lal Sircar, was the first qualified physician in India who was inspired by the favour of lay-homoeopath Babu Rajen Datta, who himself practiced homoeopathy and treated successfully many patients, some of whom were distinguished men of the time such as Pandit Iswar Chandra Vidyasagar, Raja Radha Kanta Deb Bahadur. Later Dr. Mahendra Lal Sircar was instrumental in spreading the prestige and fame of homoeopathy far and wide in India. Ultimately more and more people started taking homoeopathic treatment for various diseases.

Because of its popularity, there had been demand for a long time for recognition of Homoeopathy as a system of Medicine by the Government of India. In April, 1937 Md. Ghias-ud-idin, M.L.A., moved a resolution in the Legislative Assembly for the recognition of Homoeopathy. The resolution was passed and forwarded to the State Governments for its implementation and Bengal was the first province to constitute a Homeopathic State Faculty in 1943.

Central Council of homeopathy – CCH
http://cchindia.com/index.php
In 1973 the Indian Parliament passed Homeopathic central council bill and accordingly Homeopathic Central Council was established in 1974. This council is the controlling authority of the educational and practice of Homoeopathy in India.

Over the years, CCRH had branched into 51 subordinate Institutes and Units functioning in different parts of the country.To improve the functioning of the research centers further and to ensure quality research, the Dept. of AYUSH has decided to consolidate the centers further, by merging the smaller units, in two phases, i.e. to consolidate to 24 centers in Phase – I and to 19 centers in Phase-II. In Phase -I, a number of Units have been merged with other Institutes or Units making it a total of 24 Institutes / Units at present as given below:

Aims and Objectives
1. To formulate aims and patterns of research on scientific lines in Homoeopathy.
2. To initiate, develop, undertake and co-ordinate scientific research in fundamental and applied aspects of Homoeopathy.
3. To collaborate research studies with other institutes of excellence towards promotion of Homoeopathy.
4. To exchange information with other institutions, associations and societies interested in the objects similar to those of the Central Council and especially in observation and study of diseases.
5. To propagate research findings through monographs, journals/workshops & develop audiovisual aids for dissemination of information to the profession & public.

AYUSH
www.indianmedicine.nic.in
To provide equal status with other systems, Govt. of India had constituted separate department – Indian Systems of Medicine and Homoeopathy under the Ministry of Health and Family welfare.