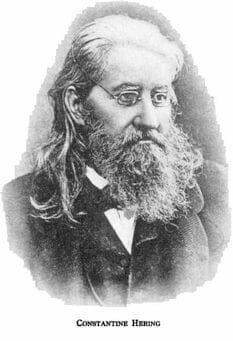 Dr. Constantine Hering, the “father” of homoeopathy in America, was born on the midnight of January 1, 1800 in the town of Oschatz in Saxony (now in Eastern Germany). He grew up in a religious household.

Conversion to Homoeopathy
In 1817 he attended the Surgical Academy of Dresden for three years and from 1820 he studied medicine at Leipzig University. While at Leipzig he was the student-assistant of Dr. Henrich Robbi, an antagonist of homoeopathy.At this time, Hahnemann was an eyesore to the stalwarts of orthodox medicine, because ‘Organon‘ was a challenge to their system of medicine.  Dr. Robbi was a critic of Hahnemann and like other physicians ridiculed Homoeopathy and Hahnemann.

In 1821, when the campaign against Hahnemann was at its worst, C. Baumgartner, the founder of a publishing house in Leipzig, wanted a book written against Homoeopathy, a book which would quite finish the system. Robbi was asked to write it, but he declined for want of time and recommended his young assistant Hering. Hering set about the work and nearly finished it in the winter of 1822.

But going through Hahnemann’s works for the sake of making quotations, he came across the famous ‘not a bene for my reviewers’ in the preface to the third volume of ‘Materia Medica Pura‘, which said, among other things, “The doctrine appeals not only chiefly, but solely to the verdict of experience – ‘repeat the experiments’,  repeat them carefully and accurately and you will find the doctrine confirmed at every step’ – and it does what no medical doctrine, no system of physic, no so-called therapeutics ever did or could do, it insists upon being judged by the result.”

Hering decided to accept the challenge. The first step was to repeat the cinchona experiment. The result was what Hahnemann had predicted. Hering began to see the truth in homoeopathy. Further study of the homoeopathic ‘Materia Medica‘ convinced him about Hahnemann’s conclusions. The book against Homoeopathy thus never saw the light of day.

In the winter of 1824, Hering’s right forefinger was cut while making a dissection on a dead body. The wound rapidly became gangrenous. In those days such wounds were mostly fatal. The routine orthodox medicines had no effect. Luckily for Hering and for homoeopathy, a disciple of Hahnemann named Kummer persuaded him to take homoeopathic treatment and gave him Arsenicum album. After a few doses he felt better and the gangrene healed completely. Hering was surprised and his interest in homoeopathy knew no bounds. He contacted Hahnemann for further instruction

Instead of writing the negative review, he immediately quit the job and left the University to become one of the most influential proponents of homeopathy of all time. Hering received the degree of M.D. from the University of Wuerzburg with highest honors. The theme of his thesis was “De Medicine Future” (The Medicine of Future). Hering graduated in 1826. In his doctoral thesis titled, “De Medicina Futura”, Hering declared himself to be a homoeopath.

In the years of 1827-1833, Hering was sent to Paramaribo, Surinam by the King where he conducted Zoological and Botanical research for his government. Soon after, the King attempted to prevent Hering from publishing his homeopathic findings, but instead, Hering resigned the post and became the Physician-in-Attendance for the governor of Surinam’s capitol, Paramaribo.

Hering and Lachesis
Hering accidentally proved the remedy Lachesis while he was triturating the Bushmaster’s venom in his home-laboratory in Paramaribo. He was attempting to find an improved substitute for the cowpox inoculation that Jenner was developing in Britain, which Hering felt was extremely dangerous and very heavy-handed for homeopathy. His interest and experience with snake venom led him to surmise that the saliva of a rabid dog, or powdered smallpox scabs, or any other disease products, viruses, or venom’s, might be prepared in the new Hahnemannian way to give a fail-safe method of curing disease. He unwittingly paralyzed his right side from further self-testing of higher and higher attenuations of Lachesis. Hering stayed in Paramaribo for six years and then emigrated to America and settled in Philadelphia in 1833.

Hering and Homoeopathy
In 1848 he chartered the Hahnemann Medical College at Allentown, Pennsylvania, which was considered to be one of greatest homeopathic teaching institutions of all time and devised the Homoeopathic Domestic Kit. Hering and his students treated over 50,000 patients a year and trained a total of 3500 homeopaths.

Hering began organizing his voluminous notes into his classic “The Guiding Symptoms of Our Materia Medica” the year before he died, in 1879, and it was completed by his students and published posthumously in 1891.Hering was the first to use nitroglycerine in medicine for headaches and heart problems (30 years before its first use in orthodox medicine). He suddenly died one evening of a heart attack after returning from a house call to a patient on 23 June 1880.
Hering is popularly known as “Father of American Homeopathy”. His influence extended across the USA with the result that homoeopathy flourished in that country for about 70 years. He believed that “The force of gentleness is great.”

He enunciated the “Law of Direction of Cure” known popularly as Hering’s Law. This describes how -“The cure takes place, from center to periphery, from head to extremities, and in the reverse order of the development of the symptoms.”