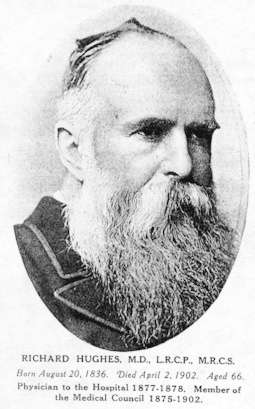 It took considerable courage for a doctor to declare himself a Homoeopath in Hughes’ day; nevertheless Hughes seems to have felt no reciprocal hostility for his orthodox opposite numbers & indeed in his last published work, ‘The Principles & Practice of Homoeopathy’, he made a remarkable plea for reconciliation. He was well aware of the many shortcomings of Homoeopathy & of the “fancies & follies” that had become incorporated in it. What was needed, he said, was for orthodox doctors to bring their resources of time, expertise & intellect to bear on Homoeopathy & help to put it on a sound scientific footing.

Generic similarity
The drug should definitely be capable of altering state of health and again the alteration should be in the same intensity as the sickness. Again the nature of alteration produced by the drug should be similar to that of the disease to which the patient is suffering   from that is in fever

Specific similarity
Specific morbid state originate as the gradual result of the interaction between the organism and its environment ,it cant be more similar to the disease causes but may meet corresponding areas in the living organism changes in the state  of health so specific similarity can be found out by compariaring the various common ailments in diseases & drug action .

If these five points are found in a drug then ts known as pathological similimum .

Administration of drugs according to hughes same as those of Hahnemann

Principles and Practice of Homoepathy