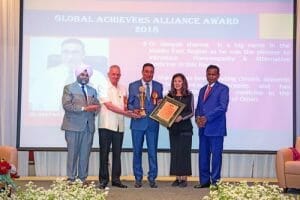 Dr Deepak Sharma, homoeopathic doctor practising in Oman since 1996, has been honoured with ‘Pride of Middle East’ – Healthcare Excellence award for his contribution and achievements in alternative medicine (Homoeopathy) in Middle East, especially Oman.

Dr Sharma, a well known name in Oman, is a graduate in Homoeopathy from Delhi University and post graduate from Ireland.

The award was conferred on him by Her Royal Excellency, Princess Dr Mom Luang Rajadarasri Jayankura of Thailand and Dr Udit Raj, member of parliament, Government of India, in a ceremony organised by Global Achievers Alliance, an Indo-Thai non profit organisation which recognises people from around the world, who have made a difference in their fields and contributed to the society as a whole. The elaborate and festive award ceremony was attended by many esteemed dignitaries from Thailand and India.

He thanked His Majesty Sultan Qaboos bin Said for officially allowing the practice of Homoeopathy in Oman 23 years back and giving him a chance to help the people of Oman with this holistic way of treatment, where the person as a whole is treated without any side effects.

He is a subject speaker on Homoeopathy and research in international seminars and an honorary guide and teacher to many young homoeopaths from different countries.