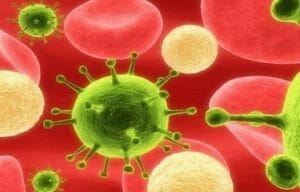 RBC (Normal Red Cell) – Erythrocyte
Human red cell is normally a circular, non-nucleated, biconcave disc; it is very elastic and can undergo astonishing deformation when passing through narrow capillaries. Normal diameter is 7.2 µm. The surface area of the cell is about 140 µm², much greater than its volume when contained in a sphere. Thus O2 and CO2 exchanges are maximized with the biconcave configuration.

DEVELOPMENT OF RBC
The process of red cell production or erythropoiesis begins in the embryonic sac and is continued in the liver, spleen and lymph nodes in the maturing foetus. By the end of pregnancy and after birth, however, the process is restricted to the bone marrow. As time progresses the contribution from long bones decreases and in adult life, only the marrow of membranous bones such as vertebrae, ribs and pelvis is involved.

Pluripotential or uncommitted stem cells which have the potential to produce any type of blood cell divide and develop into erythroid stem cells committed to form erythrocytes. These divide and mature, synthesizing hemoglobin and eventually forming normoblasts.

Cytology of erythroid cells
Stage I: Pronormoblast (Proerythroblast)
This early cells which is derived from stem cells, is large; the cytoplasm is a deep violet- blue and there is a small crescent, showing a paler staining, around the nucleus, the cell is devoid of haemoglobin. The nucleus is large and the chromatin forms a fine stripped reticulum and contains several nucleoli.

Stage II: Early normoblast (Early erythroblast)
This cell is some what smaller, the nucleoli have disappeared and the chromatin network is fine and shows a few nodes of condensation.

Stage IV: Late normoblast (Normoblast)
This cell represents a maturation of the previous stage; the condensed chromatins assuming a ‘cart-wheel’ appearance and finally becoming uniformly deeply stained (pyknotic). There is a decrease in the size of the cell; increased condensation and finally pyknosis of the nucleus.

Nuclear material is extruded and the endoplasmic reticulum reabsorbed, producing first a reticulocyte, containing a few remnants of endoplasmic reticulum, and then an erythrocyte. Normally only these two cell types are found in the circulation, with reticulocytes making up less than 2% of the total. This percentage rises during periods of rapid erythrocyte synthesis, when more immature cells enter the circulation. Mature red cells take the form of biconcave discs which deform easily within the narrow capillaries. The normal red cell count in blood is 4x 1012 to 6x 1012/ L.

Erythrocyte Destruction
Ageing erythrocytes are destroyed, often in the spleen, after an average life span of 120 days. The phagocytic cells of reticulo endothelial system degrade the haemoglobin released, with iron from the haem and amino acids from the globulin molecules being recycled. The porphyrin ring is converted into bilurubin, which is further metabolized by the liver and then excreted in the bile.

Control of Erythrocyte Production
Erythropoiesis is controlled by the kidney, which releases a hormone known as erythropoietin if the delivery of O2 to renal cells falls below normal. This will occur if the concentration of circulating haemoglobin is reduced. i.e. during anaemia. The bone marrow responds by increasing the red cell production, thus increasing the haemoglobin content back to normal. Since this control loop is sensitive to tissue O2 levels rather than the actual haemoglobin concentration; other conditions which reduce the O2 content of blood will also stimulate erythropoiesis, even if haemoglobin concentration is normal. This is seen at high altitudes, where the partial pressures of O2 in the lungs and blood are reduced. Over a period of weeks at high altitudes, erythropoietin stimulates an increase in the haemoglobin concentration, with a rise in haematocrit and red cell count (compensatory polycythemia). It is for this reason that athletes wishing to increase the O2 carrying capacity of their blood often train at altitude.

Nutritional Requirement for Red cell Production
Erythropoiesis and haemoglobin synthesis require adequate supplies of the V-B12 (cyanocobalamine) and folic acid. As well as the mineral iron. Deficiencies of these may cause anaemia.

Other substances essential to erythropoiesis

MORPHOLOGY OF RED CELLS
A thin and well stained blood smear is essential for a proper study of the morphology of normal and abnormal red cells. The cells are studied the best in the area between the tail and the thicker head of the smear, away from the edges. i.e. where the cells lie just near their neighbors without overlapping.

The points to be noted regarding normal mature cells are:

Size and shape: There is moderate variation in the diameter of RBC (average 7.2 mm). Most cells are round, but a small percentage may be slightly oval.

Staining: Cells of normal subjects are stained a pink colour with Leishman’s stain. The staining is deeper at the periphery and gradually lessens towards the centre of the cell; this area of central pallor occupies less than 1/3 of the cell diameter and is due to the biconcave shape of the red cell.

Reticulocytes
These are juvenile red cells and contain the remnants of basophilic ribonucleoprotein which was present in greater amounts in the cytoplasm of the nucleated precursors. This material appears either as a precipitate of granules, or in the form of interlacing filaments. Reticulocytes do not contain nuclei.