Deeming the plea for a ban on distribution and sale of Arsenicum album 30 (Aa30) and other homoeopathy drugs for prevention of COVID-19 as frivolous, the sessions court on Saturday imposed an exemplary cost of Rs 10,000 on the two petitioners, observing that the applicants took undue advantage of the existing pandemic, and made an attempt to derive “cheap publicity”.

Principal District and Sessions Court Judge SR Navandar dismissed the application filed by Aadam Baig and Abhishek Haridas against the Pune Municipal Corporation (PMC) commissioner and district collector. Both applicants are officebearers of a social group, Care of Public Safety (COPS). While offering judgment, the court noted, “They have taken a lot of time of the court, particularly when it is busy dealing with important urgent bail applications of jail inmates and injunction matters. Such conduct on the part of mischievous applicants needs to be curbed by imposing exemplary costs.”

The duo earlier in June filed a plea under section 30 of the Protection of Human Rights Act, 1993, demanding prohibition on the use of homoeopathic medicines in Pune city and district. The plea stated that the Supreme Court and High Court have dismissed applications seeking an exploration of the alternate medical systems of unani and homoeopathy to treat COVID-19. In January 2020, the AYUSH ministry also directed that all ayurvedic, unani and Arsenicum album homoeopathic medicines should be taken under guidance of and as per the prescription of a registered practitioner.

But, the applicants said chemists under PMC limits are selling homoeopathy medicines allowed by the civic body without prescriptions. Doctors and AYUSH ministers failed to prove the use of homoeopathy for COVID-19 prevention and so, consumption of this medicine could be injurious to health, they said, adding that people are rushing to chemists to buy such medication, flouting distancing rules. The application further states that as per the Protection of Human Rights Act, each district court has been declared as a Human Rights Court. Despite multiple complaints, PMC did not control use of Arsenicum album and other homoeopathy drugs in its jurisdiction, which caused the violation of human rights of all citizens. So, they sought an immediate ban on Aa30 and restraining of PMC and the district collector from distributing it amongst citizens. 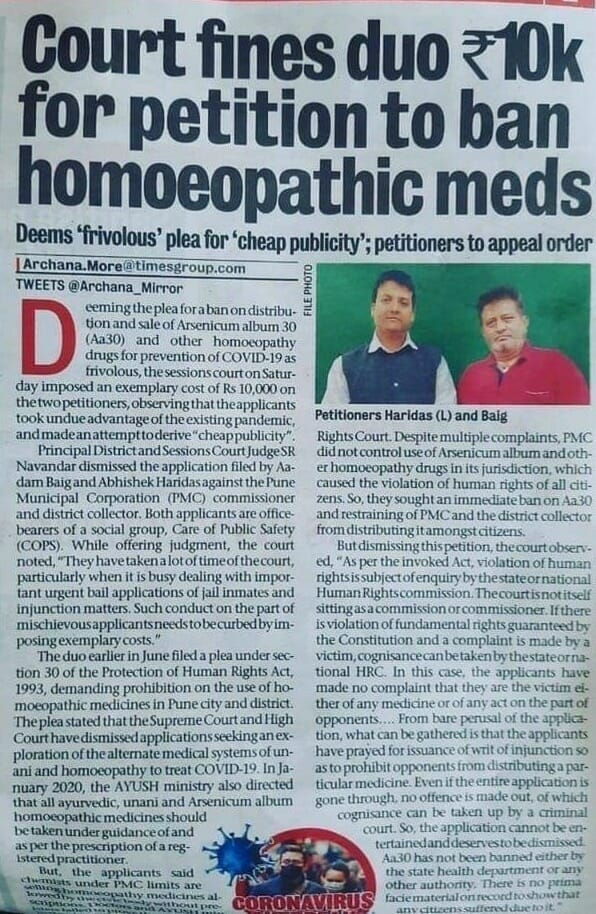