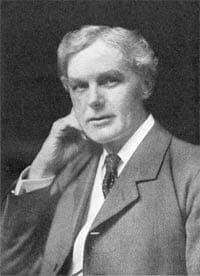 Dr. John Henry Clarke was born in 1853. He was one of the most eminent homoeopaths of England, who devoted his whole life for the advancement of Homoeopathy. He took his degree at Edinburgh University in 1875 as gold medalist in several subjects, followed it up with the M. D. and further academic successes and appointments in 1877.

He became a keen follower of Dr. Compton Burnett who was himself in the direct hierarchy of Ruddock. In April 1885, Dr. Burnett edited his last volume of The Homoeopathic World and the next month, May 1885, Dr. Clarke commenced as editor. He was editor of ‘The Homoeopathic World’ for twenty-nine years. He was also a consulting physician to the London Homoeopathic Hospital.

Politics.
Clarke was a leading advocate of anti-Semitism. Anti-Semitism (also known as Judeophobia) is prejudice against or hostility towards Jews. He served as chairman of ‘The Britons’ from its formation in 1919 until his death as an associate of Henry Hamilton Beamish. He wrote several articles on Christianity that has a militant bent.

WORKS OF J.H. CLARKE
Clarke was keen in his writing and it is even said that he had a desk in his carriage. For many years, he was the editor of The Homeopathic World. He wrote many books, his best known were Dictionary of Practical Materia Medica and Repertory of Materia Medica (i.e., the Clinical Repertory).

DICTIONARY OF PRACTICAL MATERIA MEDICA (3 VOLUMES)
The Dictionary is an excellent book giving all types of information about drug-effects, presented in a most absorbingly readable form. Dr. Clarke did not confine himself only to the remedies proved according to Hahnemann but also presented clinically proved remedies used by other types of physicians.

The schema
The body of every homœopathic Materia Medica must consist of a Schematized list of the Symptoms belonging to each remedy. This is known, in brief, as “The Schema.” In the Dictionary it comprises that entire portion given under the heading, SYMPTOMS.

The introductory sections
It is of great assistance in the understanding and using of the materia medica, and in addition, gives us some introductory guide.

“Clinical”
Next, under the head, CLINICAL, an alphabetical list of the diseases in relation to which the remedy has manifested, or seems likely to manifest, some curative power are given.

“Characteristics”
Under this Dr. Clarke endeavored to bring together the leading individual features of each remedy. It is not a bare list of keynote symptoms. But it is written in a more or less connected, narrative form, so that it will not have the effect of a catalogue on the reader’s mind. This part will contain an account of the leading Conditions of aggravation and amelioration which characterise the remedy;─an essential portion of a practical knowledge and understanding of homœopathic remedies.

“Relations”
Under this will be found an account of the chief allies of each remedy. When a remedy (e.g., Belladonna) has done all that it can in a case, it is of very great use to know of a remedy (e. g., Mercurius) that is likely to follow out and complete its action, where both are related to the case. When this relationship is very close the two related remedies are said to be complementary to one another, as is the case with Iodine and Lycopodium. On the other hand some remedies have a very injurious effect on each other’s action when one is given immediately after the other. Dr. Clarke gives the example of a chronic case which was doing well on Calcarea, irretrievably spoiled by a prescription of Bryonia immediately following. Further, it is necessary to know the antidotal relations of remedies in order to be able to control the over-action of any remedy administered.

Causation
Under this section, the conditions to the effects of which the action of a remedy is particularly suited, are mentioned. The cause of any state is a keynote indication. A case of Rheumatism, for example, supervening on a wetting, will probably not be cured by the same remedy which would have cured if exposure to dry cold had been the cause. The effects of over-eating may resemble the effects of over-drinking, but a different remedy will probably be needed in each case. Shock due to physical injury will probably need Arnica; if due to fright, Opium will most likely be called for.

Types of symptoms
In this book, different symptoms are not graded according to importance. Dr. Clarke’s reason is this: while not denying the utility of emphasizing by conspicuous type symptoms of proved characteristic value, this can only be done at the cost of apparently depreciating symptoms not so marked.

THE PRESCRIBER
In this book, the ailments are arranged alphabetically to assist prescribers to select the most likely remedy. Concise information about potency and dosage has made this book very useful.

CLINICAL REPERTORY TO THE DICTIONARY OF MATERIA MEDICA
It facilitates the ready analysis and comparison of the more than one thousand remedies considered in the materia medica. Its arrangement is simple and practical. The ‘clinical’ section gives merely the remedies which clinically have proved of value in the treatment of certain morbid states. Special sections are devoted to ‘causation’ and to ‘temparament’, covering that matter of special adaptability of certain remedies to ‘types’, ‘dispositions’, etc. A repertory of relationships(clinical and natural) gives in tabulated form complementary remedies,compatible and incompatible remedies, remedies which follow well and which the remedy under consideration follows well,antidotes, and duration of action.