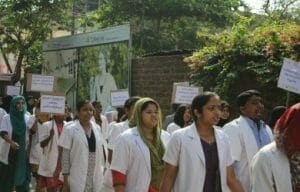 SAMBALPUR: The students of government-run Odisha Medical College of Homoeopathy and Research, Sambalpur and representatives of various socio-cultural organisations of the town on Thursday took out a rally against the ban on admission into Bachelor of Homoeopathy Medicine and Surgery (BHMS) course. Later, they submitted a memorandum addressed to the Chief Minister through Collector Balwant Singh and apprised him of the problems faced by the college.

Expressing their grave concern over apathetic attitude of the State Government towards the college, the students in the memorandum stated that the ban on admission into BHMS course from the current academic year by the Central Council of Homoeopathy (CCH) would lead the college to lose recognition and affiliation. Due to lack of required infrastructure and faculty, CCH directed Odisha Government not to allow students to take admission recently.

Raising apprehension, the students said continuous neglect by the government has left the college at the doorstep of closure.

The college was established in 1978 and taken over by the government in 1994. Due to acute shortage of faculty members, bio-medical equipments are gathering dust. Moreover, the stipend of BHMS House Surgeon is too less than that of MBBS students.

Earlier, a memorandum was submitted to Minister of State (Ind) for Health and Family Welfare Atanu Sabyasachi Nayak on the issue through Revenue Divisional Commissioner (North) Pramod Meherda. In the memorandum, the locals mentioned that a large number of patients depends on the hospital but it is managed by six faculties against 24 sanctioned posts as per the guidelines of CCH. [Source]