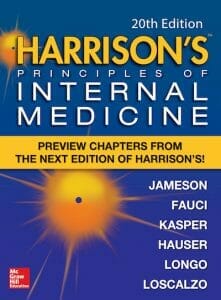 Harrison’s Principles of Internal Medicine is a textbook that has graced the shelves of untold thousands of medical students going back decades. Harrison’s Principles of Internal Medicine, now in its 20th edition, is a must-read for medical students and young internists. It has been called “the most recognized book in all of medicine.”

So says a group of researchers who found that Harrison’s and several other leading medical texts failed to disclose financial interests the authors had in the subject matter as well as payments they’d accepted from industry groups.

According to the study, authors for Harrison’s received more than $11 million between 2009 and 2013 from makers of drugs and medical devices — not a penny of which was disclosed to readers. One author, a physician, during that period received nearly $870,000 in funding, including for research, according to ProPublica’s Dollars For Docs database of payments to doctors from drug companies.

The researchers, led by Brian Piper, a neuroscientist at the Geisinger Commonwealth School of Medicine in Scranton, Pa., acknowledge that simply looking at patent awards and fees from biomedical companies doesn’t prove the existence of biased work. But they note that medical textbooks are enormously influential due to their perceived authority and the wide readership they receive

Some of the potential problems that these conflicts could present occur when textbooks recommend certain treatments, Piper said.

Piper and his colleagues recommend that textbook publishers adhere to the same disclosure standards that journals follow, making sure that readers know about relevant financial relationships.

“Medical textbooks widely used by students and young doctors are riddled with undeclared conflicts of interest, a study has found.

While virtually every leading medical journal now requires authors to declare any potential conflicts of interest, the same rules do not apply to textbooks widely used in the US, says a team from Bowdoin College in Brunswick, Maine, in findings published in AJOB Empirical Bioethics.1

The most striking example is Harrison’s Principles of Internal Medicine, now in its 20th edition. By searching a database of payments made to US doctors by 17 drug companies (ProPublica’s Dollars for Docs), the team found that contributors to the widely used textbook had received more than $11m (£7.9m; €8.9m) between 2009 and 2013 from drug and device manufacturers, none of it disclosed.

One contributor, identified as a male physician, received $856 067 over the period, the great majority being for research. Four of the top 10 recipients were oncologists, two were neurologists, and two endocrinologists. A second search showed that contributors to Harrison’s were often patent holders, an interest that also went undeclared.

The study limited itself to textbooks published in the US and to doctors resident there, as the data source does not include payments to doctors overseas. The other textbooks the study looked at are less well known and include books on pharmacology, osteopathy, applied therapeutics, and dentistry. The payments to contributors to Harrisons far exceeded those to authors of the other books examined.

The study’s authors, led by Brian Piper, said that they wanted to discover whether more than 1000 contributors to the textbooks had patents or received payments sufficient to warrant disclosure. “The answer is clearly in the affirmative,” they said.

Setting the results in context, they pointed out that earlier studies had shown that more than half the contributors to guidelines on cardiology had conflicts of interest and that three quarters of US physicians in cardiology or neurosurgery also had conflicts. Payments should not be used to stigmatise recipients, but they urged that “full transparency should become a standard practice among the authors of biomedical educational materials.”

Talking to the US health news website STAT, Piper said that after six years of doing this kind of study he was not surprised by the findings. “However, we continue to be surprised that the publishers and authors of medical textbooks do not have the same transparency standards about conflicts of interest that have become widely accepted for clinical trials and other primary sources,” he said.

McGraw-Hill, publisher of Harrison’s, did not respond to STAT’s request for comment.
http://www.bmj.com/content/360/bmj.k1118.long