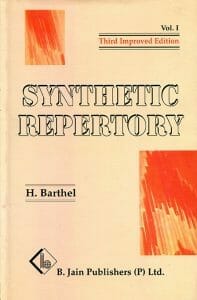 Basically an extention of Kent’s repertory.

The word ‘synthetic’ is derived from the word ‘synthesis’ which means ,assembly of separate and subordinate parts to complex whole.In this work the author has synthesized about 16 authorities and have put together to form a complete repertory.

Some new rubrics which are there in ‘Synthetic ‘and are not there in ‘Kent’.

Additional rubrics other than in Kent’s generalities include –various clinical rubrics,toxicity ,constitutionalsymptoms,modalities ,ailments from and prophylaxis.Complexion,seasons and weather as direct rubrics.

Constitutional symptoms: as in boger<&>

Some rubrics in ‘Synthetic’ repertory that are present in ‘Kent’s repertory’ other than generalities.

Dreams :approximately 226 extra subrubrics as compared to Kent;Many of them are interesting and often heared  in clinics.

Ejaculation ,Pollution as rubrics.Inkent it is scattered in various chapters as subrubrics.