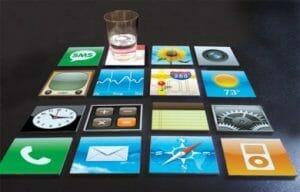 The following is excerpts from the proving of Mobile phone radiation, published in Homoeopathic Medical Panorama January-March 2002 (www.homedpa.com). Detailed proving with daybook references and reportorial description can be had from the site http://www.littlemiracle.freeuk.com. All copyright to authors. Please forward any more information, clinical experience, symptoms, to The South Downs College of Homoeopathy , email littlemiracle@freeuk.com or to, Helios Homoeopathic Pharmacy, 89-97 Camden Road, Royal Tunbridge Wells, Kent TN1 2QR, U.K. email pharmacy@helios.co.uk

Why is this proving?
There is no need to explain the hazards of mobile phone radiation as much have been brought out by the media. Still its use in everyday life is only increasing, as also is the ever-increasing range of symptoms experienced by users. It seemed an obvious choice for a proving.

The Substance – Toxicity & Resources
Research is currently being conducted around the world on the effects of radiation emission from mobile phones on the brain and is being widely reported in the Media. At present one of the main causes for alarm are the effects of microwave fields on the blood-brain safety barrier, an opening of which may allow proteins and toxins to enter the brain. Some researchers warn that low-level radiation from mobile phone handsets heats the brain, causing headaches, memory loss and dizziness.
Concerned organisations such as Waveguide and Powerwatch can be reached via the Internet:-

Pharmaceutical Preparation
We asked two moderate users of mobile phones for their assistance. They were each given a 4g. bottle of lactose which was attached to the mobile phone and the number and length of calls were logged. They were also requested to avoid leaving the phone and attached lactose close to any other interference such as TV’s or microwave ovens, etc.
Phone 1:

Equal quantities of the two exposed lactose powders were then mixed together and triturated to a 3c in accordance with footnotes to paragraph 270 of the 6th edition of the Organon. Potentisation in liquid form was continued up to a 30c.

The Provers
The proving was started in January 1999. It was conducted using guidelines as laid out in ‘The Dynamics and Methodology of Homoeopathic Provings’, by Jeremy Sherr.

Seven of the eight provers, all of them females, where given potencies 6c 12c and 30c, one was given placebo (who did not report any symptoms) and one prover attempted antidote after one day so she was exempted from the experiment.

The provers were instructed to take up to a maximum of three doses, twice a day, for a maximum of two days, and to stop as soon as symptoms appeared. For the majority, only one or two doses were necessary.

Acknowledgements
Our heartfelt thanks to all involved: To all the second year students of South Downs School of Homoeopathy without whose total enthusiasm and energy this proving would not have been possible. To Lenise Shaw for her unwavering help in the collation. To Ian Sandon for his support and enthusiasm, and for sharing the arm power involved in the trituration! And to Helios for supplying the finished remedy!

Mind
Increased alertness and clarity of Ideas, which are more resolute, more cut and dried than normal. Very tired (physically) but mind active. Also dullness of mind. Cannot concentrate. Forgetful. Indifference and indolence towards duty. Confusion, as to what to do. Ordinary tasks take more time. Sensation as if out of space-time integration. Feeling of detachment from self. Restlessness and agitataed. Cheerful and laughing at silly things. Feels emotionally open and so much happy. Feels isolated. Want to hide or get away. Mental calmness. Relaxed. Delusions as the head being carried like a ball on a stick. Tongue becomes fatter. It not working properly so cannot get the words out. Feels very childish and cuddly. Dreams; vivid, busy, frightfull.

Head
Tingling at the very top of head. Head feels watery and blobby. Pain and pressure at temples. Sensation of a deep pressing-ache going invards or downwards alongn the spine. Head ache, premenstrual or at the beginning of the periods.

Eyes
Eyes watering. Weepy eyes, small pupils. Eyes look half sleepy and half drunk. Sensation of eyelash in right eye. Vision blurred in left eye, not better for blinking. Worse concentrating. Clearing when I walked around.
Ear
Brief pulsating pain in right ear, close to surface where the ear joins the face. Both ears blocked on waking, causes mild deafness

Nose
Numbness in nostrils, alternating sides, always begins in the left and goes to right side.

Face
Pain on cheekbone or jawbones, as of two numb spots from gripping of a vice. General numbness over both cheeks. Very itchy nose. Like hair on the nose. Worse over right nostril, as if hair hanging over it.

Teeth
Strange sensation in lower left molar like great pressure had been exerted on the tooth. Sensation that the tooth has been pushed. There is no pain, but it feels as if silver paper is touching it.

External Throat
Ring of perspiration around neck, like a halo.

Abdomen
Sharp pain on right side of abdomen. About the region of appendix. Abdomen blotted with flatulence. Heamarrhoids with difficult stools.

Kidneys
Twinging, back, right side. Stabbing pain just over kidney area. Lasted half an hour.

Male
(The proving done only in female volunteers.)

Chest
Restlessnes as of energy at chest. Perspiration at chest. Breasts feel very full and swollen, pre-menstrual, or between periods. Nipples tender and sensitive to touch.

Back
Back of neck stiff, also top of shoulders. Slightly burning pain, left scapula, spreading up on left side of neck. Stretching make it burn. Lumbar pain on and off all morning, worse bending forward and backward.

Extremities
Feeling very chilly, especially legs and feet. Wants legs covered and better covering them. Limbs heavy and tired during evening. Varicose veins especially right side. Throbbing veins in right leg, particularly marked in right lower leg, not in the usual place. Sharp pain in right leg, just above the knee in the muscle, worse, walking. Better by being still, or sitting.

Sleep
Yawning, frequent. Sleep, late in getting but deep and refreshed. Night mares.

Skin
Tingling, itching patches, appearing randomly all over body, either side and with no logical pattern, much better by scratching.