The Ministry of AYUSH is privileged to bring out Commemorative Stamps as its humble homage of the nation to 12 Master Healers of AYUSH systems from the modern era.

Dr. K G Saxena was an eminent Homeopathic doctor and made Herculean efforts for the recognition and advancement of Homoeopathy. He was the first Honorary Adviser (Homoeopathy) to the Government of India and also served as the Honorary Physician to Dr. Rajendra Prasad, the then President of India. He was conferred Padam Shree award.

He has also been conferred with National Award at Calcutta by N.C. Chakravarty Memorial Committee for his magnificent contribution towards the development of Homoeopathy. The international Homoeopathy congress, New Delhi decorated him with ” President of Honour ” in 1967 and again in 1989 in Calcutta. He had been the chairman of the Homoeopathic Advisory Committee of Govt. of Delhi from 1994 to 1999. 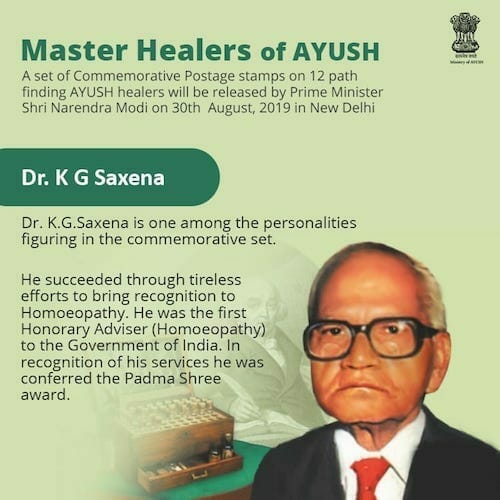